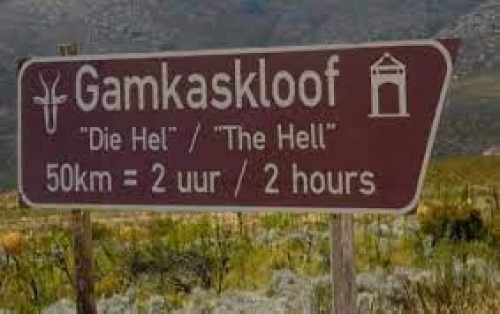 In this newsletter we continue with our story on the Swartberg Classic Tour. This chapter deals with the drive from the  Meiringspoort to Prince Albert.

Meet the heroine of our tour - Liesel Fowler. Always bright and happy, Liesel was one of the guests who took the walk up to the waterfall in Meiringspoort. She slipped and fell awkwardly, breaking her arm. This happened at 3.30 in the afternoon. Her husband David, whisked her off to Oudtshoorn where she received excellent medical treatment. By 7.30 pm the Fowlers were back at our overnight venue to rejoin the tour. 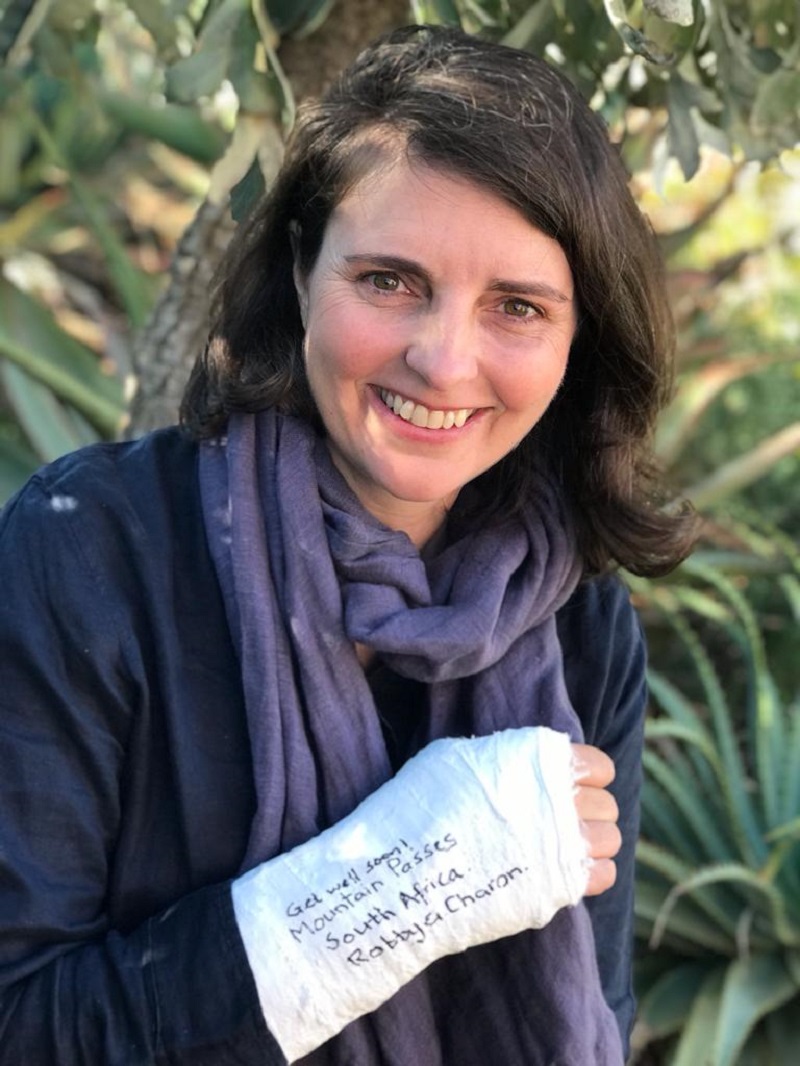 Liesel Fowler - the lady at the falls / Photo: David Fowler

We wrote a limerick for her:

There was a lady called Liesel

Who drove in a Prado diesel

She slipped on a rock

And became a crock

With her cast becoming an easel.

And that folks, is how we roll!

Towards the northern end of Meiringspoort, a gravel road leads away to the left (west) and is easily recognizable by a cattle grid at its start. We turned off the smooth tar of the N12 and hit the gravel and dust once more.

We were running on schedule, and started this lovely rural loop with the Bloupuntrivierpoort - an attractive little poort displaying the same Cape Fold mountains as we had just enjoyed in Meiringspoort.

It follows the course of the Bloupunt river and its tributary as it heads into an ever steepening poort of twisted and contorted rock formations to terminate about 3 km later. There are a few cattle grids on the route and one farm gate which must be closed after passing through.

Following on its heels, is the Kleinvlei Pass - a substantial pass with some very sharp corners and steep gradients. The views are really good from this pass making the little loop well worth the extra time. 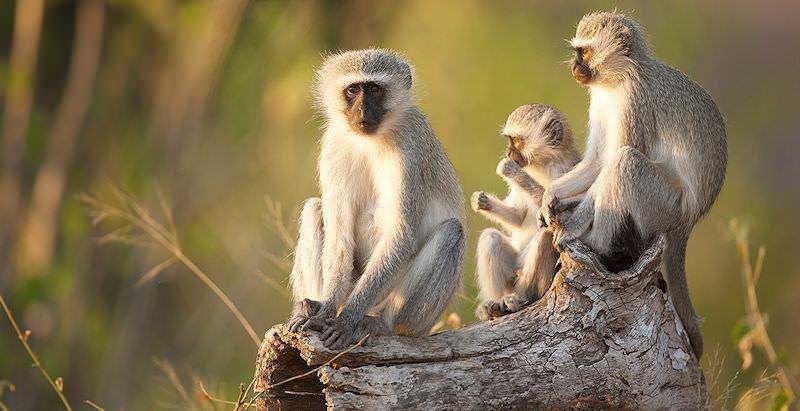 Cape Vervet monkeys are commonly seen in this area

The last of the three passes and poorts on this road (P1721) is the Aapsrivierpoort, which follows the Aapsrivier offering attractive scenery through Little Karoo scenery. On the left hand bank of the river an old road propped up with dry=packed stone walls can still be seen, which was probably the original road through the poort, now no longer accessible.

The road reconnects at the junction of the N12 and the R407 at Klaarstroom. We had less than an hour's driving to complete, to reach Prince Albert.

The Kredouw Valley at the western end of the passKKredouw Pass

With the convoy back on tar, we headed west for the beckoning comforts of the town of Prince Albert. The next and penultimate pass of the day was the Kredouw Pass. The eastern climb to the summit is a long fairly straight road with good views of the Swartberg range to the left.

The real action happens on the western descent. Immediately after cresting the summit, the wide and well watered Kredouw Valley displays like a giant water-colour. To the right the scar of the old road can still be seen cutting its tortuous path down the mountainside, whilst ahead of you the wide and smooth tarred modern version creates a fine example of how road engineering improved over half a century.

The farm lies at the foot of the mighty Swartberg Mountains. It totals 1000 hectares of which 22 hectares are olives 7 hectares nuts (pecans and almonds). It also grows apples, cherries and figs. All these crops are irrigated with fresh, cold and pure mountain water collected from the peaks of the Swartberg.

It's a good place to stop in and linger a while and purchase some farm fresh produce.

Just before we drove into Prince Albert , we had one final pass/poort to complete the tally for the day - Witkrantspoort. This short poort often goes by unnoticed after motorists have traversed either the Swartberg Pass or Meiringspoort (both amongst the most famous of South African passes) and that is quite understandable. If you put the Witkranspoort anywhere else in South Africa, it would get plenty of attention. The poort is the final bit of mountain scenery to drive through before reaching the beautiful Karoo village of Prince Albert.

The south facing cliffs of this mountain often present a greenish colour, making this poort unusual and attractive and no doubt, where it got its name from. This phenomenon is apparently caused by lichens growing on the cliff faces, where they are mostly in the shade out of the debilitating Karoo sunlight. The poort is dramatic with towering mountains on either side, but it is also quite short and very soon the first buildings of Prince Albert make an appearance. The poort has hardly any change in altitude and the bends are all fairly gentle. 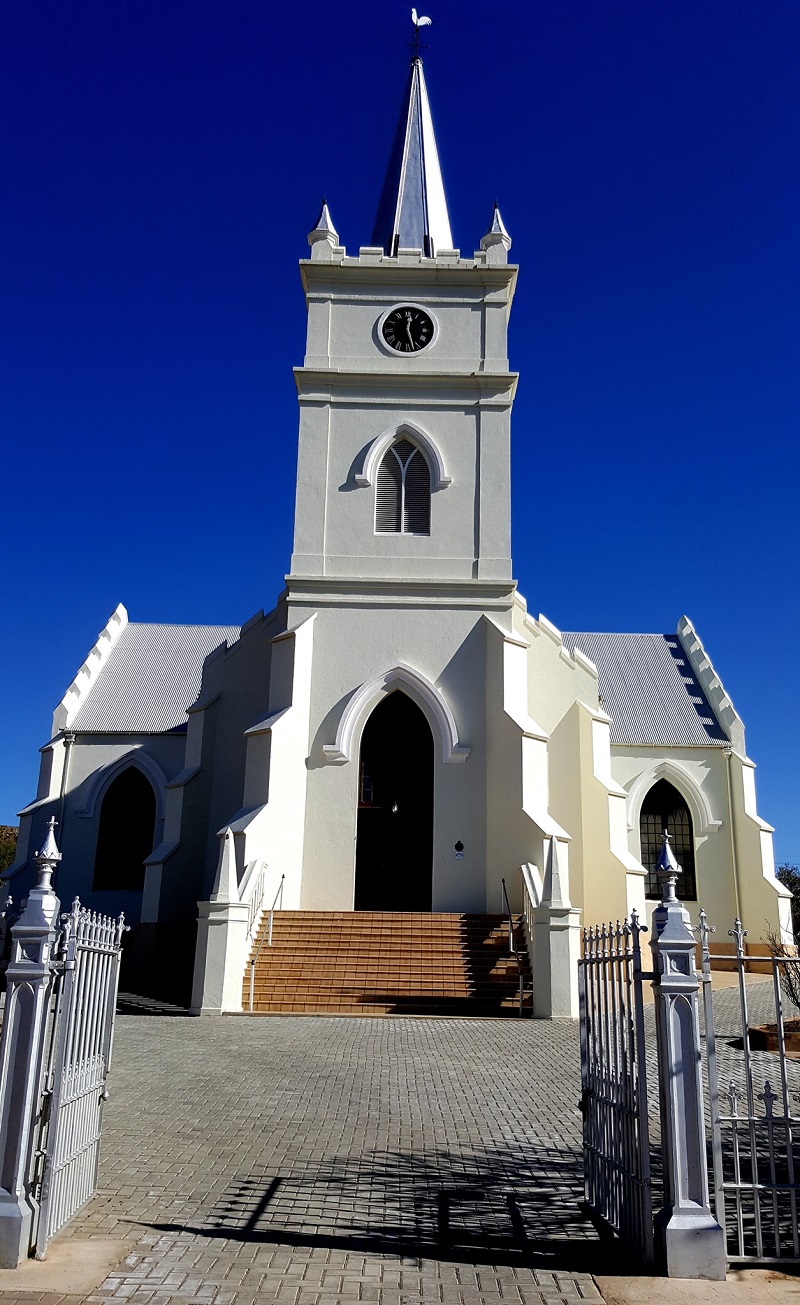 Prince Albert was founded in 1762 on a farm called Queekvalleij that had been on loan to Zacharias and Dina de Beer since 1762. Originally known as Albertsburg, when it obtained municipal status in 1845 it was renamed Prince Albert in honour of Queen Victoria's consort, Prince Albert of Saxe-Coburg. Prince Albert was historically part of the Cape Colony.

During the latter part of the century, a nugget of gold was discovered on a farm in the area. Due to the fact that a similar occurrence had led to the Gold Rush in the Witwatersrand, this new discovery precipitated a similar population boom. However, the prosperity up north was not to be shared in Prince Albert and the gold mined turned out to be minimal.

Due to its location, Prince Albert became a British garrison during the Second Boer War in 1899. The town became the site of several clashes between the English and the Boers during this period.

Prince Albert has a small local population, it survives today as a tourist town. The village has many authentic Cape Dutch, Karoo and Victorian buildings, thirteen of which are National Monuments. There are several olive farms and other very large export fruit farms in the area, as well as sheep farms, an export mohair trade, and each year the village celebrates the well-known Olive Festival. Birding, hiking, cycling and stargazing are other pursuits for visitors. The area is well known for its endemic veld plants.

The pure water and air in Prince Albert are optimal for producing the highest quality Spanish jamon. Prince Albert is the headquarters of Lucas Jamon, the only producer of the Iberian delicacy in South Africa.

Click on the link below which will take you directly to the Krdedouw Pass page on our website, where you can read the full story and watch the video.

Paraproskian: "Nostalgia isn't what it used to be"

Tagged under
More in this category: « Latest News! 18th November, 2021
back to top