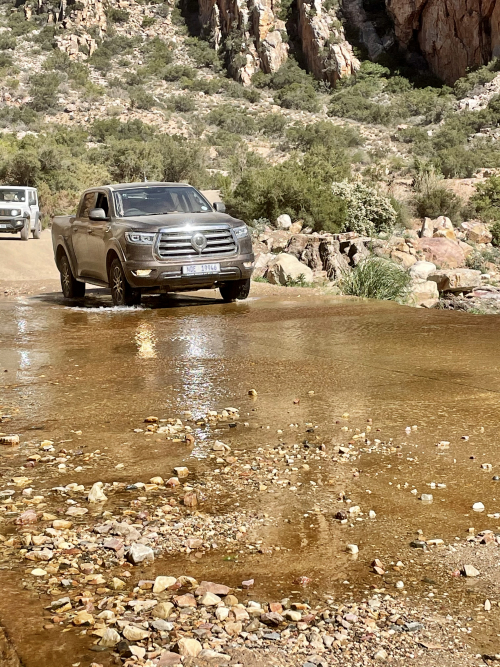 It  takes a few days for the euphoria to wear off. The Wild Coast mud has been washed off the cars and dirty clothes have kept the Speed Queen humming for hours on end. Arriving back in Cape Town after two days of drenching rain was a mixture of relief and disappointment. After spending almost two weeks in the quiet back roads of the Transkei, the speed and urgency of traffic on the N1 and N2 comes as something of a culture shock. But I suppose you cant appreciate the one without the other.

Our return from the Wild Coast created a personal flashback to March 2020 on our Kouga-Baviaans Tour where we only found out about Covid 19 when we reached Patensie several days later. A local farmer broke the bad news to us. On this trip we arrived home to Omicron. Same story; different variant (and it's not a VW!)

We arrived back in Cape Town two days ago, after completing our most successful Wild Coast Tour to date. We made a number of changes to the agenda, routing and venues which added a lot more adventure. The weather was extremely kind to us as we only had a few minutes of light rain on two of the 10 days. That's actually very good considering it's right in the rainy season.

There were punctures. Six of them in total - of which 4 were sidewall cuts; one was a conventional puncture which was sorted out with a can of Holts Tyre Weld and the sixth one was a mag rim which cracked , causing the tyre to debead. We learned a lot on this tour and we now will ask owners with 4x4's that have roof top tents to rather remove them as the height clearance on all the forest drives is an issue. For future trips we will also recommend two spare wheels (if possible). After you've had the first sidewall cut, you don't have to drive with your heart in your mouth for the rest of the trip.

All 13 vehicles completed the tour successfully. Other than the punctures, there were no mechanical issues at all. We tried a number of new venues on this tour (some were fantastic; others not so good) and we initiated a guest review survey, allowing our guests to rate each of the venues with respect to service, food and accommodation. Once the numbers were averaged out, it gave us a sound idea of how to tackle issues on future trips and to guide the hotels and lodges we use, to improve standards in a transparent and practical fashion.

We will be providing you with a detailed trip report over the following weeks.

The changes allow for each of the tours to run over 8 days/9 nights with substantially more leisure time. Guests who want to do both tours back to back will be in for a 17 day Wild Coast extravaganza.

Check out the details of each tour via the links below:

Our trip back last Monday (22nd) from Knysna to Cape Town took place during the peak of the floods in George. We resisted the urge to take a "look-see" and headed directly for the N2. Evidence of the volume of rain became evident as we traversed the Kaaiman's Pass just west of Wilderness.

We have visited Wilderness many times in different seasons, but the sight of the Kaaiman's River in full flood was something to behold. Further on, heading westwards near the Gwaing River, several cars had left the road after aquaplaning - notably two BMW's. Both looked like write-offs. It was madness driving faster than 80 kph.

Damage to homes and infrastructure in and around George was extensive, but the good news is that both the Garden Route Dam and the Wolwedans Dam at Groot Brak are now 100% full.

We opted for a new venue on this tour - Karoo View Cottages. The photos speak for themselves. Our group size was too big to be accommodated at one site, requiring us to split our group up at two venues (the other being Karoo Master Class), but our meals were all taken at Karoo View. Howard and Marion laid on a spread of note and a jolly good evening was enjoyed in perfectly pleasant and warm Karoo weather. 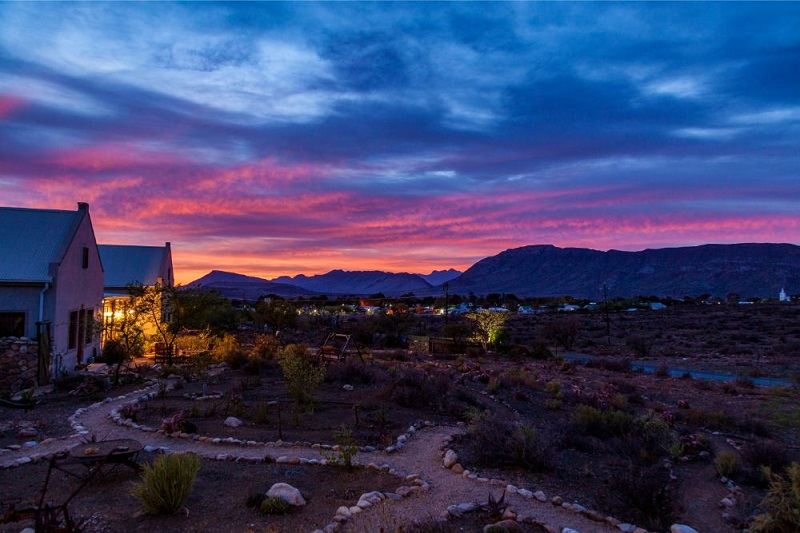 We opted for a new venue on this tour - Karoo View Cottages. The photos speak for themselves. Our group size was too big to be accommodated at one site, requiring us to split our group up at two venues (the other being Karoo Master Class), but our meals were all taken at Karoo View. Howard and Marion laid on a spread of note and a jolly good evening was enjoyed in perfectly pleasant and warm Karoo weather. 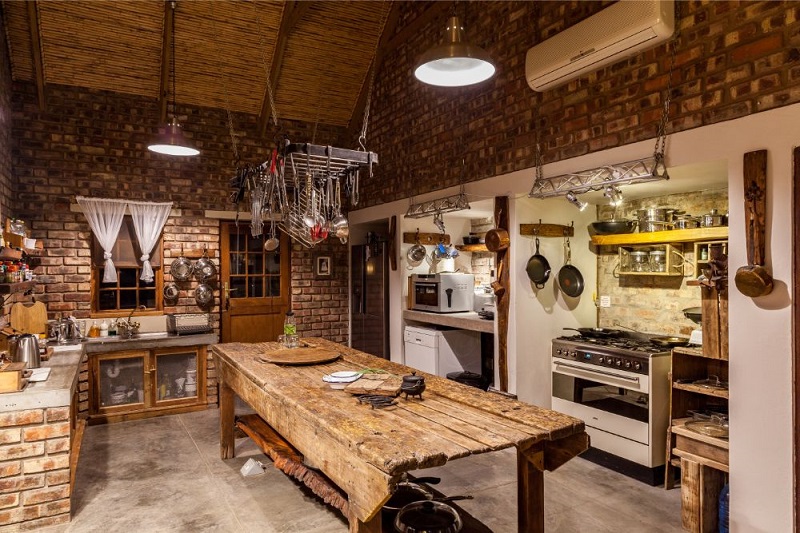 Karoo View's main kitchen where delicious meals were conjured up

Here another of our guests experienced an injury to his leg, which necessitated him withdrawing from the tour as he was in considerable pain. This was a great pity as Pierre and Lenie Conradie are wonderful guests. We missed their company then and for the rest of the tour. Pierre was one of two drone pilots whose work you have enjoyed in this series.

The food was great and the mozzies had a field day that night when we all collapsed into bed. Who would have thought you get mosquitoes in the Karoo!?

This was unquestionably the day most of our guests were anticipating; some with angst; others with excitement. The route for the day started in Prince Albert ascending the northern side of the Swartberg Pass, then tackling the Gamkaskloof to Die Hel and back to the Swartberg Pass, descending the southern side. The distance is just over 100 km but it takes the whole day to complete (including stops) 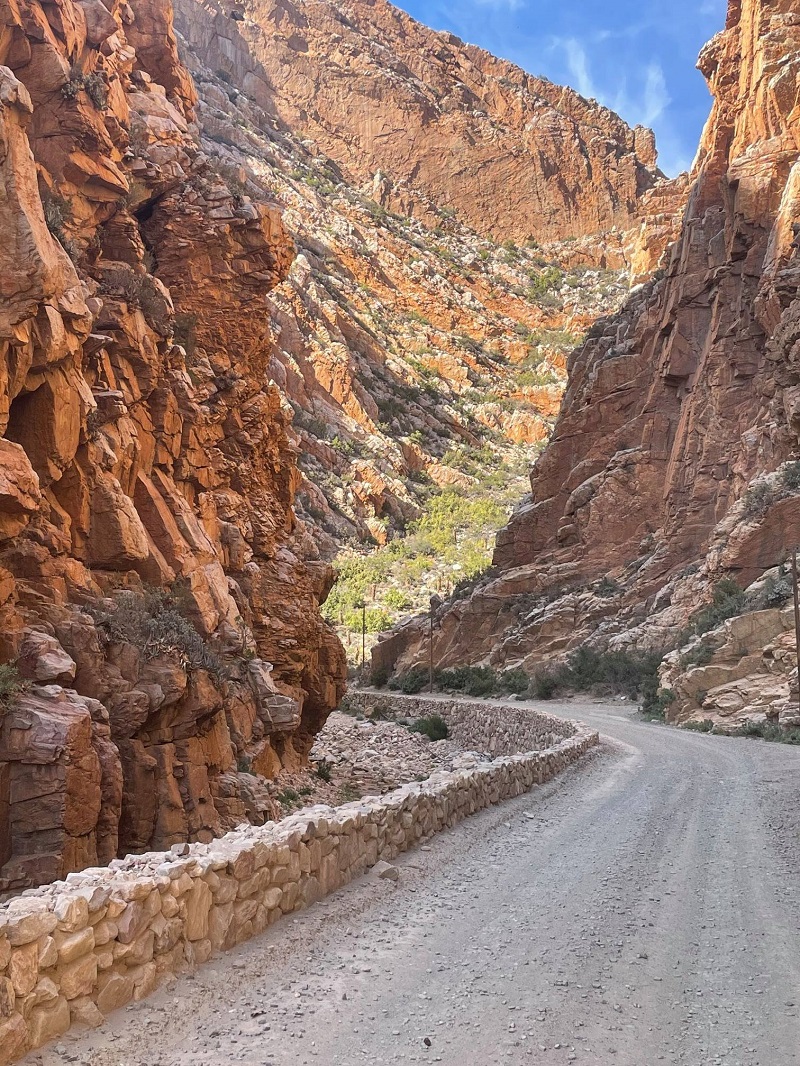 The northern entry into the first kloof of the Swartberg Pass / Photo: MPSA

The dust was hanging thick in the still Karoo air as our convoy entered the northern cleft of the kloof. The recent flood from about 4 years ago had ripped the road apart, but the roadbuilders have done a great job of rebuilding it - and still using the dry-packed walling method to keep things looking authentically Thomas Bain.

The almost vertical walls of the kloof hem the road and river into a small width. It leaves one feeling small and vulnerable as one ponders the enormous natural forces that formed these mountains.

We stopped at Eerstewater for our first break. It was this spot where oxen and horses were watered in 1800's before commencing the long climb up the pass. 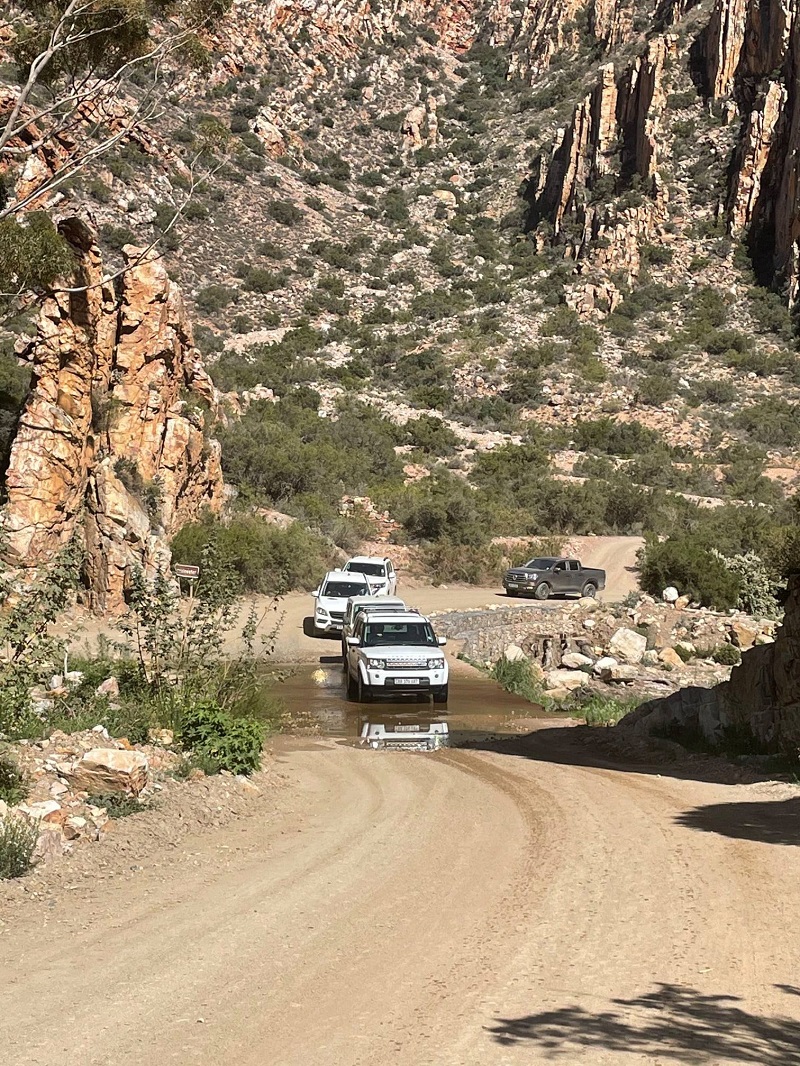 Our convoy at Eerstewater / Photo: MPSA

This is arguably the most beautiful and spectacular section of the Swartberg Pass. Once we left Eerstewater, the road soon crosses the stream for a second time and yes, you guessed it, they named it Tweedewater - the very last place you could reliably water your oxen and horses in 1875.

The road then rises gently past Malvadraai, so named after the wild geraniums that grow at that spot in the kloof. This is a popular picnic spot and has always been a good resting place for travellers over the past 150 years.

Beyond Malvadraai the kloof opens up into a much wider one, which is named Mullerskloof. As the gradient picks up to 1:10 a sizeable clearing on the right hand side of the road marks the spot signposted as 'Blikstasie'

A short but tricky scramble up the embankment will get you to the ruins of the old building that once housed the convicts working on the construction of the pass. It had a corrugated iron roof, hence the name (Tin Station). Watch out for the thorn trees. 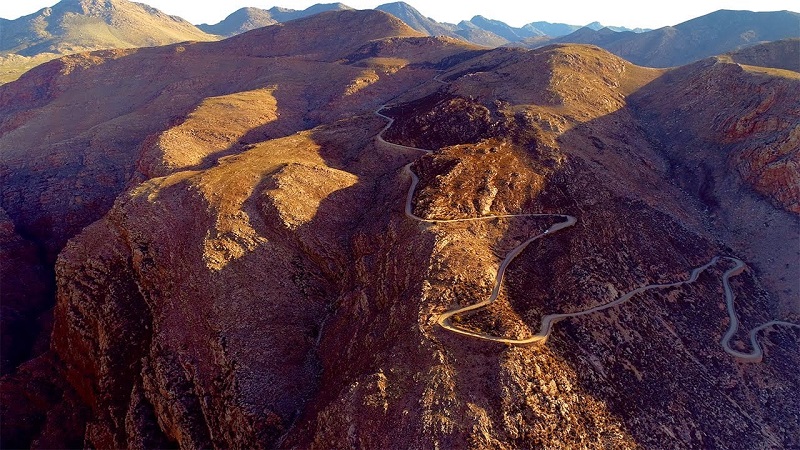 From Blikstasie you will get your first views of those famous hairpin bends up the mountain slope. It was here that David Kramer filmed his VW Bus advert in his red velskoens.

The stone walls reach up to 13m in height along this section, however there are very few places to stop safely without impeding other traffic.

Near the second last switchback there is a widening in the road big enough for 3 vehicles, which offers good views of the hairpins below you. 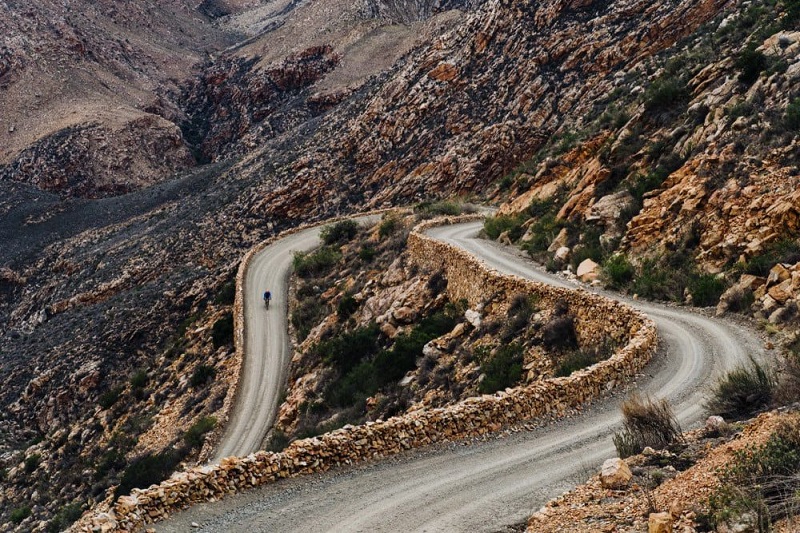 The magnificent curves and bends of Mullers Kloof

Once through Mullerspoort, the gradient levels off somewhat as a large mountain top area appears ahead and in the far distance the road can be seen disappearing around a spur of the mountain. That marks the Teeberg viewsite.

The views to the north are simply mind blowing in their scope and grandeur as a deep kloof has carved its way in front of you, revealing multiple layers of geology. The view-site is small; perhaps managing about 3 vehicles if parked carefully. A small concrete picnic table and chairs is your landmark. 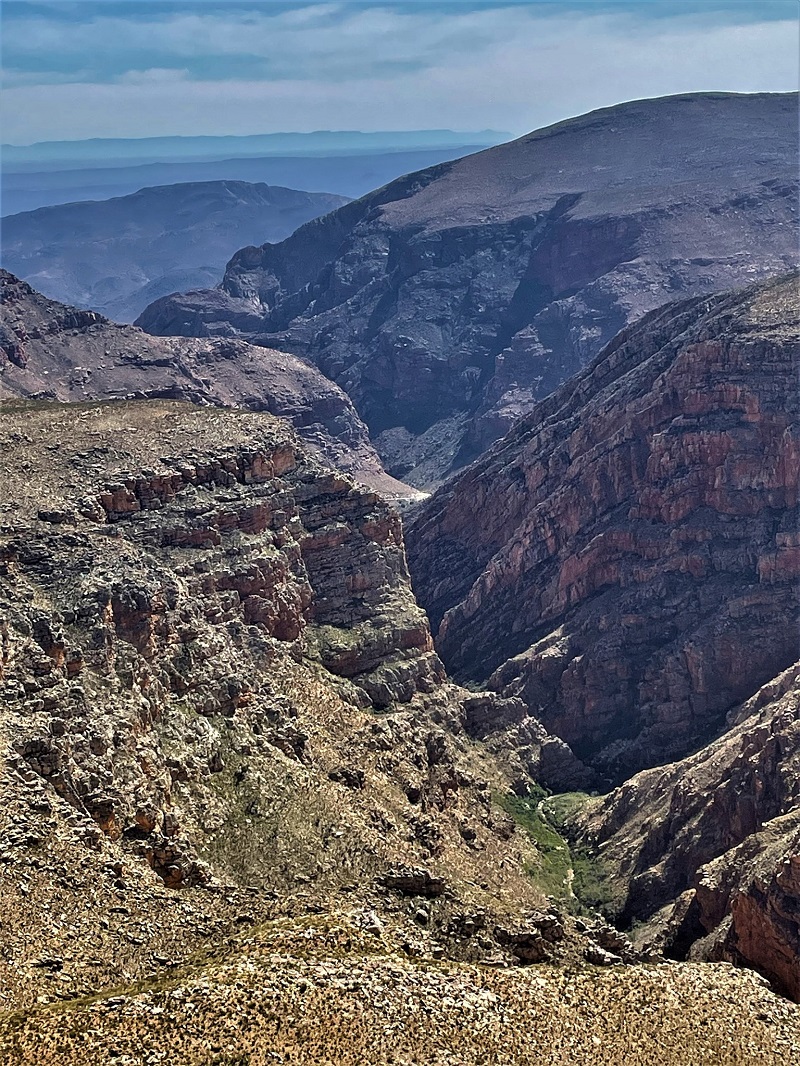 There is a story that a film crew in a hired VW bus stopped here excitedly to jump out and take photos. A soft rumbling sound behind alerted them too late that the Kombi's handbrake had not been fully engaged and it plummeted down the mountain together with all their expensive filming gear. Luckily no lives were lost.

Next week: Teeberg to Die Hel

Dictionary: ARACHNOLEPTIC FIT - "The frantic dance you do just after walking into a spider web"