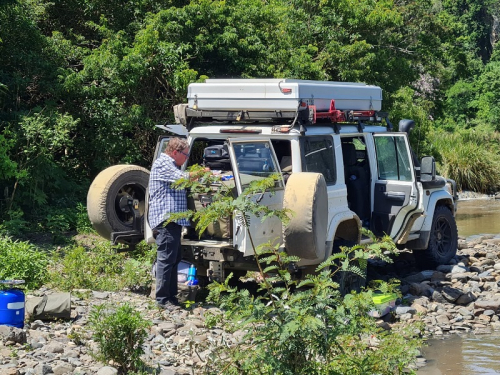 This summer has produced a lot of rainfall with most of the country seeing overflowing dams and some torrential downfalls. Aughrabies has been massive and other videos have surfaced (Karkloof in KZN comes to mind) showing enormous amounts of water flowing in most rivers. All the Vaal and Orange River dams are more than 100% full, as is the Katse Dam in Lesotho.

Even more surprising is the Beervlei Dam near Willowmore which never seems to have water in it, is now very close to being full. In fact has filled twice between November and January) This dam has an interesting story which many people don't know about. The dam was built in the 1950's as a flood control dam and it's meant to be EMPTY. When the Grootrivier floods, this is the dam that contains the inflow (it can hold 86 million cu.m.) and prevents flood damage further downstream. As the water in the catchment area is high in salinity, the Beervlei Dam was never designed to store water for irrigation due to the water contamination with salt. When the dam fills up it is quickly released in a controlled manner for irrigation downstream before the salinity has a chance to contaminate the water.

The dam must be one of the most maligned infrastructures in SA and most people are critical of it as it is mostly empty. Urban legends have flourished about long term droughts, a poorly built dam wall, and bad planning by the DWA. Of course we now know that those stories are all hogwash. Water flowing into the dam is fed by the Grootrivier, which drains a large part of the Karoo.

There's always something new to learn!

We are busy adding the final touches to a brand new tour - the Garden Route Saunter, which will start in Riversdale and end at Storms River Mouth. This 5 day tour will be open to normal vehicles and include a mix of about 70/30% gravel and tar. The route will cover many passes including all the famous ones in the Garden Route like Garcia's Pass, Robinson Pass, Montagu Pass, 7 Passes Road, Prince Alfred's Pass, Grootrivier Pass and the Bloukrans Pass. Points of interest will include a forest walk, the Big Tree, Spitzkop, Jubilee Creek, Millwood, De Vlugt, World of Birds, Natures Valley, Storms River Bridge and the Storms River National Park.

The tour is scheduled to take place in July.

The rain forecast didn't materialise, much to everyone's relief. We departed promptly after breakfast from The Spotted Grunter, heading along the new R61 towards Mthatha, traversing three passes in quick succession. These were Isinuka Poort, Butybuse Pass and the Mngazi River Pass, after which we turned south at Tombo. The R61 is in beautiful condition with a wide, smooth surface and adequate emergency lanes. The only negative are the speedbumps (or traffic calmers, as they are called these days), which appear regularly and speed has to be dropped from 100 kph all the way down to 30 kph. The minibus taxis with their very low front clearance have to cross them dead slow - and often at an angle. It makes driving on the R61 a bit frustrating, but with the high number of taxi accidents in the region, I suppose the authorities had little choice but to go that route.

Our journey continued southwards on a fairly decent tar road. By the 4th day one gets used to the Wild Coast road hazards and every one was already in a relaxed frame of mind. After 15 km the tar came to an end near the Isimilela Hospital as we dropped down to drive along the banks of the Sinangwana River. The road soon gets enveloped in dense forests then pops back into bright sunlight at the village of Pamba. The heading is due west at this point and once more the road plunges into the forest to cross the Luzube River, after which a fork without signage beckons a decision to be made.

Well, fortunately we know where we're going, so it was a sharp left at the fork, heading directly for the coast. This particular section of Day 4 is absolutely charming and more so when the weather is good. There are a few very steep climbs where signs  of vehicles that struggled earlier is clearly evident, but in a 4WD vehicle it's no problem. The views that unfold are really attractive with grassy hills dotted with colourful rondavels, sweeping down towards the coast. 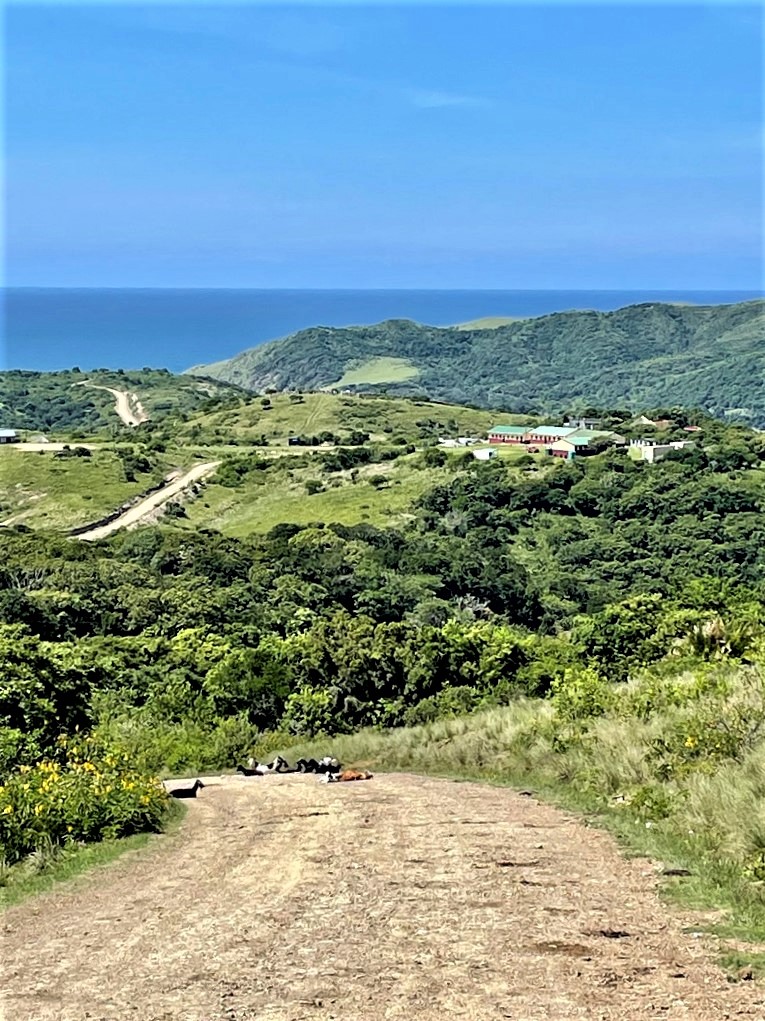 Closer to the coast, a road heads away to the left (NE) which leads to Shark's Point and Mpande Beach - both which offer idyllic and quiet beaches. Our tour did not include this side excursion due to time constraints. Just before reaching the coast, the road sweeps away sharply to the right and ascends a very long and steep hill with gradients in the 1:5 range. The coastal views are glorious and we always stop near the top of this hill for a leg stretch and some photos. (See group photo lower down)

The road drops down very steeply into the next valley, where the day's tough moment was waiting for us - the crossing of the Gogoldwini River. During our 1st Wild Coast Tour, we lost a vehicle here, after its engine sucked water in. We are consequently very wary of this crossing and more so when we tour in the wet season. This crossing had been discussed in detail since the beginning of the tour, so there was plenty of hype amongst our guests. We offer to tow guest's vehicles across with their engine's switched off.

However on arrival at the crossing, the river was not more than about 50cm deep. Relief for the cautious guests and disappointment for the adventurous ones. The river mouth which is less than a kilometre away is accessible and another one of those magnificent golden brown beaches begging to be enjoyed.

After another steep climb up the far side of the valley, the road forks and we turned right heading north into the densely wooded hills, with the occasional small village with 'goggos' (grandmothers) and small children waving and smiling. The next river to cross is the Sazinge which also has a washed away bridge and requires fording the riverbed. Similar to the Golgodwini this one was also tame compared to previous years. 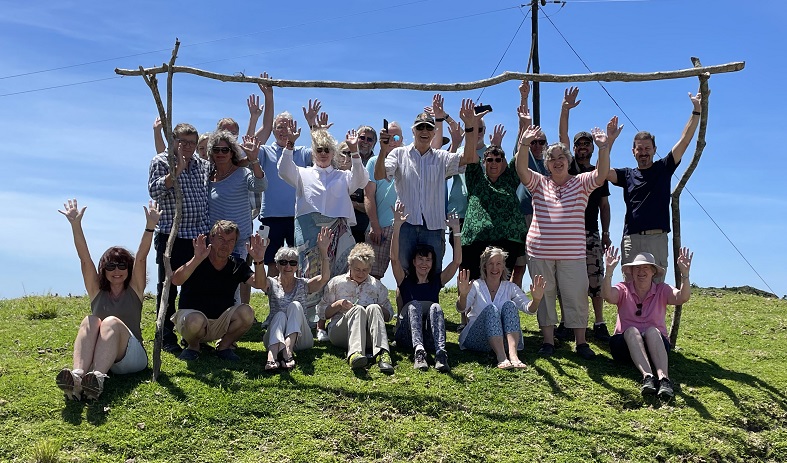 Happy faces tamed by the charms of the Wild Coast / Photo: MPSA

There are lots of rivers along the Wild Coast and one soon becomes accustomed to the familiar pattern of descending a long way down to almost sea level to cross the river and then just as steep a climb up the far side. Our route took us past the village of Mdikane, then a long and serpentine-like descent into the Mthakatye River Valley. The western ascent is steep and rutted as the road passes the Old Mthakatye Trading Post and a little further along there's a pharmacy! (Good to know in case of an emergency)

The road heads north again, then west as it skirts the next river further inland where the crossing is much easier. The villages were passed by one by one with names like Ludaka and Mdumbi, the latter which takes its name from the Mdumbi River. This pass is much longer and convoluted than the previous ones, but presents lovely scenery on both sides of the valley.

A road forks off (with a signpost!) to Mdumbi River Mouth. This very popular beach sports a number of backpacking outfits on either side of the river and is a much loved spot by hikers and surfers.

The route heads westwards passing through the villages of Gazine and Sidabadabeni, before commencing with the biggest descent of the day - to the crossing of the Mthatha River. This a major pass (which we have yet to film) and offers fabulous scenery. The bridge is still intact. 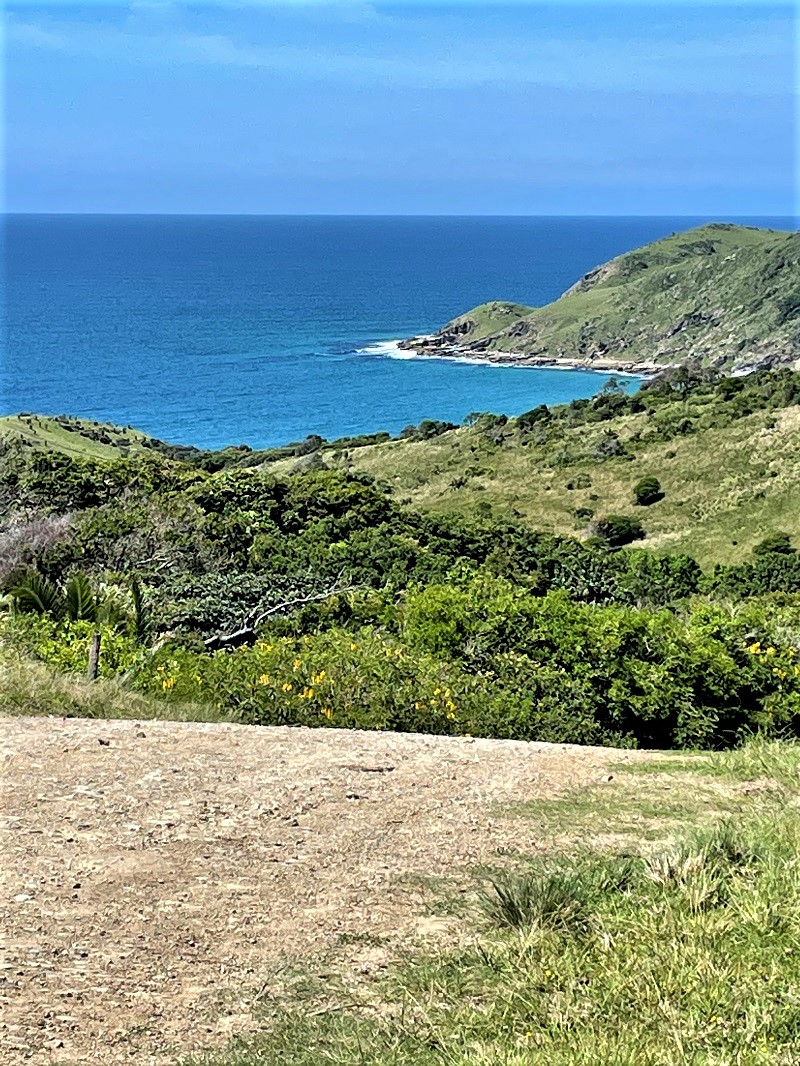 Over every hill there's a new vista / Photo: MPSA

Climbing up the far side of the valley we came across a cement-mixer truck that had experienced brake failure coming down the pass in the opposite direction. It hit the side of the cutting with sufficient force, to spin it 180 degrees facing the way it came from and turning it over on its side. It must have happened mere minutes before we got there as the driver and helper were still sitting on the side of the road with only minor injuries. Our offer of assistance was declined.

It wasn't long and we intersected with the main tar road between Mthatha and Coffee Bay and arrived at our hotel with time to spare, before gathering for happy hour and a good meal. The Ocean View Hotel is located in a nice quiet corner of the bay and has direct access to the beach. It's a beautiful spot and the food is good.

Next Week: Mapuzi, Whale Hill and Hole in the Wall

The Mlengana Pass is located just off the R61 between Port St Johns and Mthatha. It's a little tricky to find, but worth the effort of some precise navigation. The pass provides access to the second most famous rock on the Wild Coast - Execution Rock. This pass will be included as part of our Wild Coast V4 Tour in May.

Mount Nqwibi Pass - This short pass of 3,2 km connects Hlobane/Vaalbank in the north with the village of Bloemendal in the south. It has a classic low-high-low profile with a summit height of 1350m. KZN.

Leeunek - This steep, mixed surface pass has the classic low-high-low profile rising 262m over 6 km producing an average gradient of 1:23, but many parts of this pass are at a stiff 1:7. The road, which has a summit altitude of 1351m ASL, connects Vryheid with the Black Umfolozi Valley. (KZN)

Bloedrivierpoort - This gravel pass is fairly straightforward with a few sharp corners and mostly easy gradients. It descends 101 vertical metres over 3,2 km producing a gentle average gradient of 1:32, with the steepest section near the summit measuring a stiff 1:11. More significantly, the pass gives access to the memorial of the Battle of Bloedrivierpoort (1901). The road is suitable for all vehicles. (KZN)

Almansnek - This fairly minor tarred pass, designated under road number P34-4, connects the town of Paulpietersburg in the north with Vryheid in the south. It climbs 72m in altitude and is 2,7 km long, producing a comfortable average gradient of 1:38, with the steepest part being at 1: 11. (KZN)

Definitions: "Perfume" ~ Any smell that is used to cover a worse one.