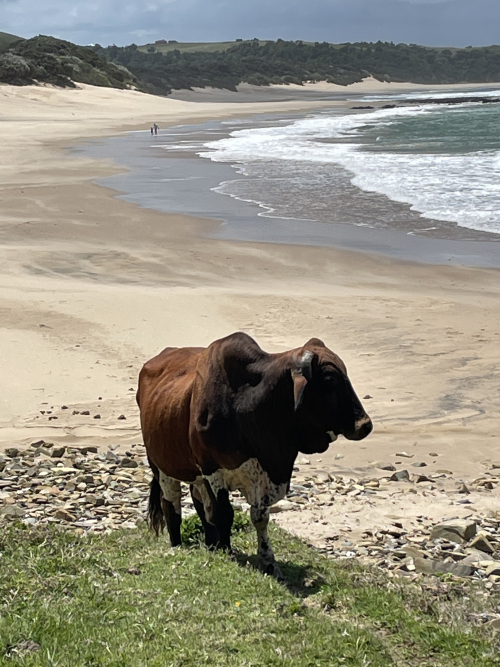 First things first. Let's get the bills paid! We still have a few spots open on both our Wild Coast Tours. If you have not visited the Wild Coast before, Here is the opportunity to experience it in the safety of a group, where you will visit all the best points of interest. The links below will provide access to the full itinerary, pricing and general information.

We will soon be releasing a 35 minute video (produced and filmed by Derick van Eeden during our last Wild Coast Tour). Besides the full video, we will release it via social media and on our MEDIA page on the MPSA website in 11 separate clips of roughly 3 minutes each. It's a monumental amount of work editing a video of this nature; sifting through hours of footage and selecting the scenes that will capture the public's imagination. We have been privy to previewing some of the chapters and I can assure you, they are really worth waiting for. Our thanks to Derick for doing the hard yards.

We will be heading off to the Eastern Cape Highlands early in March to take our guests on 5th official Ben 10 Tour. This tour is fully booked. If you want to add your name to the waiting list in case of a cancellation, please email us at This email address is being protected from spambots. You need JavaScript enabled to view it.

The Haven bowled us over with their delicious food. The wild oysters served up were of the finest quality I have tasted - and plentiful too. After breakfast it was time to saddle up our (proverbial) steeds and get ready for a day of fun and exploration. The idea was to do a west-east traverse of the Cwebe Nature Reserve. It looked so easy on the map, but we were in for a few big surprises.

The turn-off into the dense indigenous forest is just a few km north of the hotel. It became immediately obvious that no-one had driven the track in a very long time. The further we plunged down the steep slopes, the worse the track became. Trees had fallen over the track, which required sawing and manhandling. Many hands make light work as all those shiny new saws, pangas, axes and other Camel Man gear were proudly put to the test.

At one point a large tree had fallen over the road. The best we could do was saw off one of the branches that would allow us to clear under the tree. One of our vehicles, a Toyota Land Cruiser on steroids was very tall and included a roof top tent. With some very careful eye-balling we got it through with mere millimetres to spare. For future tours we recommend leaving roof top tents at home.

The track runs downhill for a long distance. The further we went, the wetter things got, which made for some very technical driving. Once we crossed the Mbanyana River, we were faced with a very steep, rocky and muddy climb up the eastern side of the valley, still completely enclosed within the forest canopy. The feeling of isolation was complete in the hushed silence with just the odd bit of birdsong and the croaking of a frog bringing a sense of reality. The traverse, which is only 4,5 km as the crow flies, took us the better part of three hours to complete.

Just as we cleared into open sunlight, the VHF crackled: 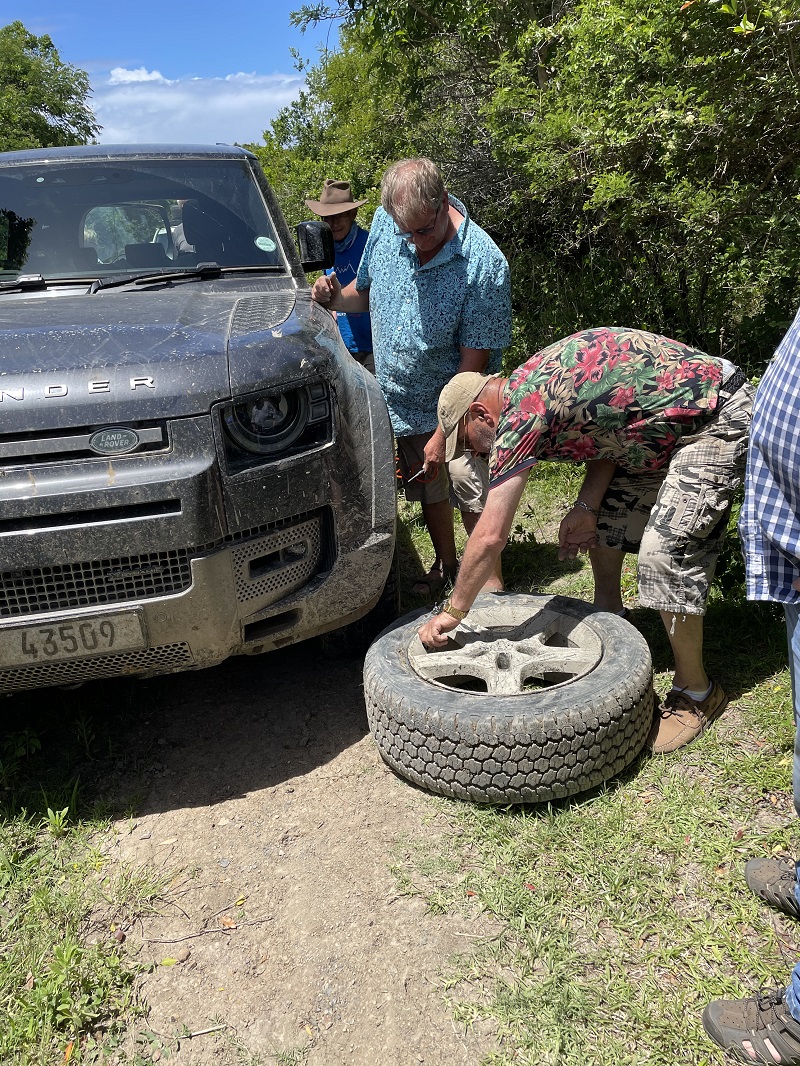 Helping hands in the form of Theo (L) and Sam soon had the spare on.

Alan & Paula Butler had brought their brand new Land Rover Discovery on its first off-road outing on this tour and it performed very well. Changing that wheel was not without its issues as the bush came right up to the track on both sides leaving little space to work. As usual Theo Hammond (already called the Puncture Man) was there to lend a hand. Once again we had the problem of trying to locate a 20 inch replacement tyre. Long phone calls between the agents (Land Rover) and tyre shops resulted in no tyre being delivered. Alan ended up completing the tour with the patched tyre and made it back to Cape Town without further issues.

We came across two Cape Nature rangers on motorcycles, who offered to help and encouraged us to do the extra loop to a spot called Breezy Point. It wasn't far along a bumpy and rutted track and Breezy Point revealed itself at the foot of a long, grassy hill in an idyllic setting. A few holiday houses and fishermen's shacks form a crescent near the beach where a tranquil lagoon completes the picture. It was breezy alright with a stiff westerly pushing through that kept most of us inside our vehicles. It was this wind which was supposed to be bringing the forecasted wet weather in. (See header photo) 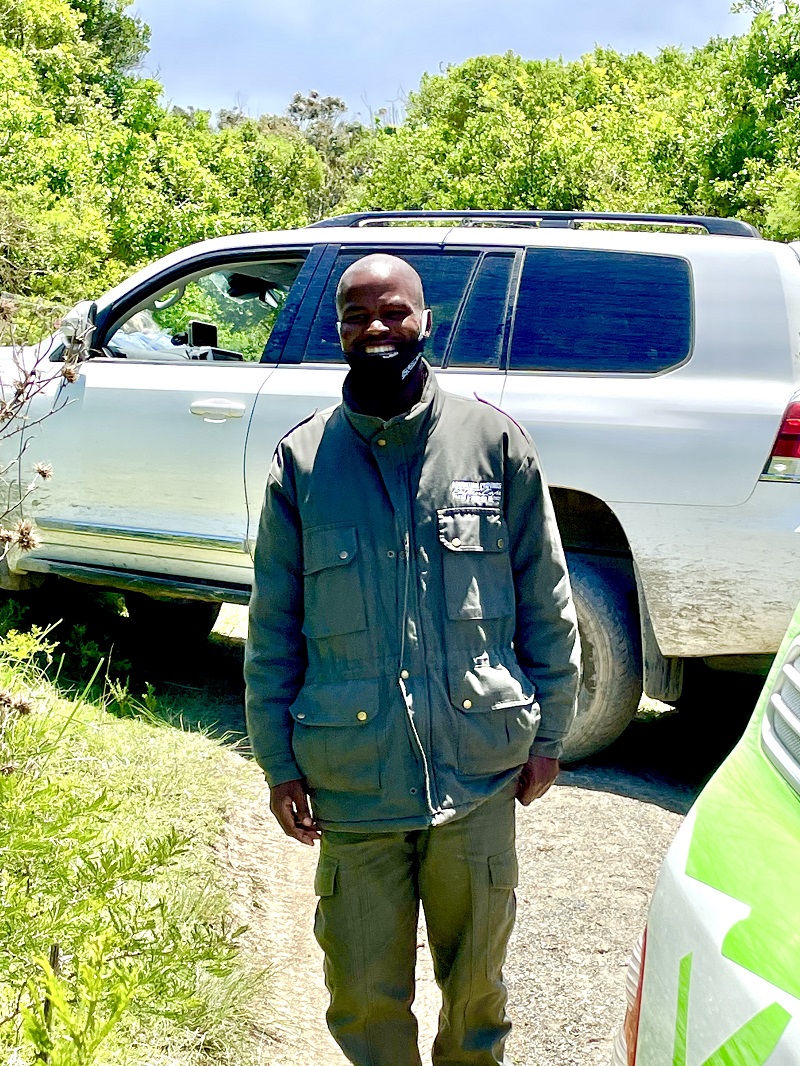 The rangers at Cwebe were friendly and very helpful / Photo: MPSA

An old bull staggered up from the beach and walked through our parked vehicles, clearly in pain and very much on its last legs. The inevitable circle of life playing itself out on the Wild Coast.

On our way back towards the exit gate of the Cwebe Nature Reserve, the next radio call came though - this time from Iaan van Heerden in the VW Touareg.

"I have a puncture"

Fortunately it wasn't a sidewall cut, so a can of Holts Tyre Weld solved the problem and kept the tyre inflated all the way back to Cape Town.

Once back at The Haven, there was time for a beach walk, or just a relaxing hour or two before happy hour and another amazing meal. We were so impressed with The Haven and the can-do attitude of the management, that we have increased the number of days at this venue for the Wild Coast V5 Tour.

Next week: Day 8 - Collywobbles and Mveso.

A discussion on the Beervlei Dam near Willowmore and Days 4 and 5 of the Wild Coast V3 Tour which include Port St Johns, Mapuzi, and Hole in the Wall.
Click to listen

This 19km long, gravel pass winds northwards up the Amathola escarpment through the beautiful Mpofu Nature Reserve, offering not only stunnng scenery and wildlife, but also some rich history and folklore. Entrance is free (at the time of writing in June, 2016) but there are gated control points at the foot and summit of the pass, where one has to sign in and out.

Tail Piece: "These are the good old days. Just you wait and see" ~ Steve Turner