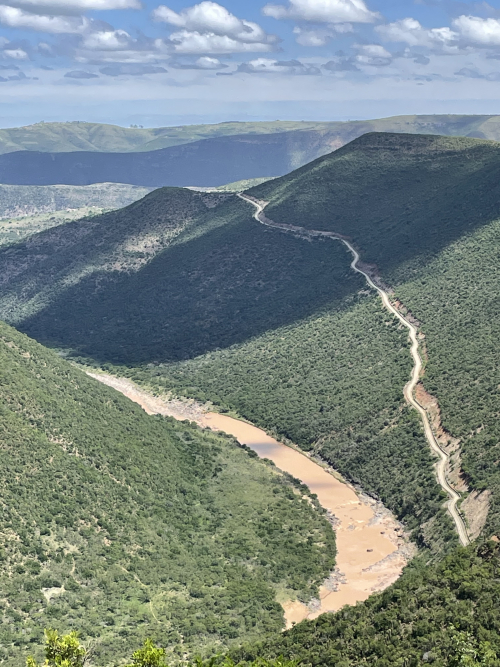 On the contour road to Collywobbles - Photo: MPSA

With Covid appearing to be on its way out of our collective lives, it seems the very real possibility of the end of the National State of Disaster is on the horizon - as is getting rid of the masks and the sanitiser. We have noticed a real upswing in inquiries for tour bookings, so our office is abuzz with activity.

6th to 9th March - the 5th (improved) version of the official Ben 10 Eco Challenge starts in two weeks' time. This tour has been fully booked for some time and remains one of our most popular offerings. This is the first time we are going to running this tour in March.

6th to 15th May - Wild Coast Tour V4 Pondoland - We have had a cancellation, so there is one ticket available.

16th to 24th May - Wild Coast V5 Mbashe Tour - This tour has one ticket available.

11th to 15th July - Swartberg Classic Tour - Bookings open today. We have scheduled this tour for mid-winter in the hopes of catching some snow. So if you fancy cold nights and crisp, clear sunny days, sign up for this popular tour.

The link in last week’s e-Newsletter of Platteland Tours’ Road Trip to Namibia did not function correctly.

This is always the longest day of the Wild Coast Tour and no easy way to shorten it. With this in mind, our routing took the most direct way to Willowvale, where our entire convoy refuelled causing something of a traffic jam. Vehicle's bellies full we drove directly to Idutywa and a short stint on the N2 before turning off onto gravel at a tourism sign "Collywobbles"

This was arguably the worst road we had driven on the tour. It was a case of shake, rattle and roll regardless of how fancy your suspension was. WE soon noted that the taxis and most locals were driving on a track well off to one side of the "road" which resembled the bottom of a stone quarry. It was 15 kilometres of bone jarring driving, but like all things, it eventually came to an end as we took our group down a very steep pass (unnamed) to the banks of the Mbashe River for a lunch break and some group photos.

This specific route down to the river is a dead end so it means driving all the way back up the ridge. One or two vultures soaring above us hinted at the promise of good viewing once we got to Collywobbles proper. The drive to Collywobbles is sublime as the twisting course of the Mbashe gorge winds its way across the mountains, presenting views from a height of almost 500m. We were doing well in the puncture department so far with no more sidewall cuts being reported. 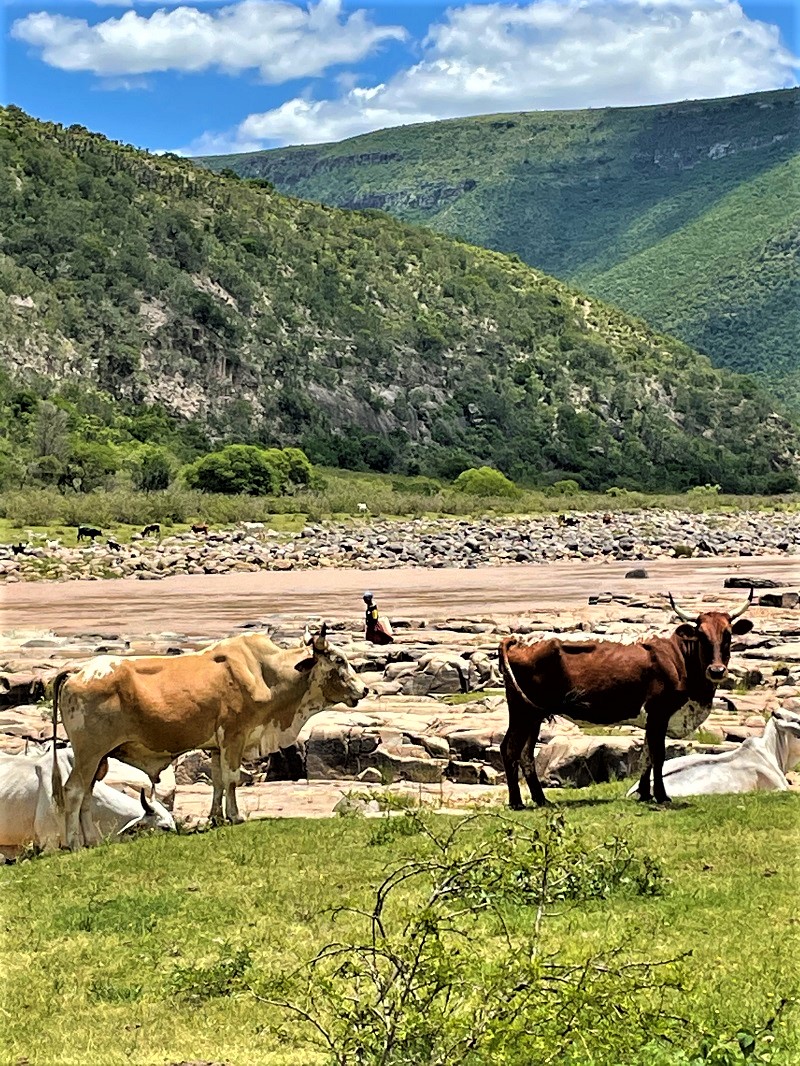 Lunch break on the banks of the Mbashe / Photo: MPSA

The final part of the drive to the vulture viewing site is a very narrow road and it is as well that the road carries minimal traffic. The road is hacked out of the mountainside with dense foliage forming a complete canopy in places. Here and there the views open up revealing the brown ribbon of the river far below in the valley. We arrived at the viewing point and the vultures were there in numbers, but they were very high above us - much higher than on previous visits. The birds are amazing to watch as they gain altitude very fast without flapping a wing.

The next problem is turning a 12 car convoy around in such a confined space, but we had a plan and soon had the convoy heading back to the main turn-off in the reverse order. We tried driving up to a higher viewpoint, but reports coming in from the front vehicles was that the road was in very poor condition. The decision was then made to abandon the diversion and we drove down to the Mbashe Dam and crossed the bridge along the dam wall. A small notice board indicated no more than 2 vehicles on the bridge at a time. A sobering prospect! 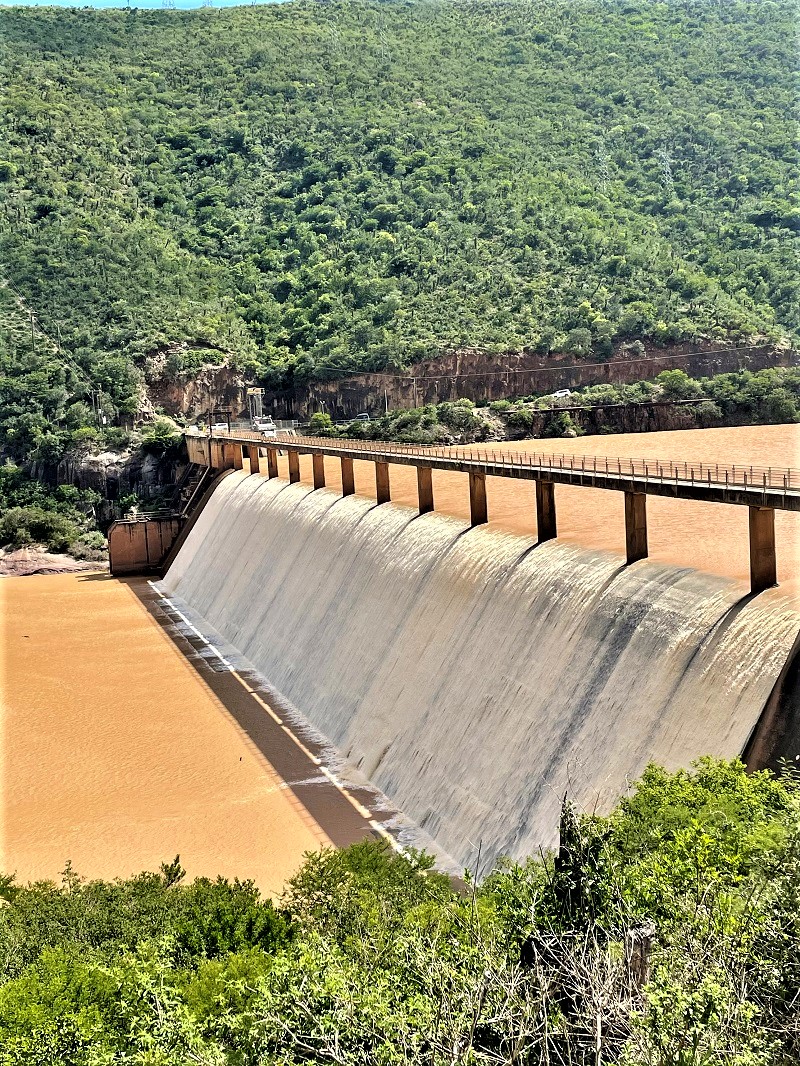 Climbing out the eastern side of the Mbashe valley makes for another interesting drive and after about 40 minutes we reached the impressive gates of Mveso - Nelson Mandela's memorial and museum. The gates were open, so we drove down the paved driveway towards the main complex. A Xhosa man came bounding down the hillside and stopped us in the lead vehicle. He couldn't speak English but it was clear that he was flustered and out of his depth. We stopped at the parking terminus about a kilometre further when the same man told us we were not allowed to enter the museum and that we were only allowed to take photos of the statue outside.

The message was fairly clear that we were not welcome and that he wanted us to leave as soon as possible. Subsequent research on the Mveso complex reveals many problems with finances and political infighting. This was a big disappointment, but rumours had proven to be correct. Some weeks after the tour, there was a news report that the incomplete double story thatched structure near the entrance had burned down in a fire.

So future Wild Coast Tours will have Mveso struck from the roll. More's the pity.

We had a long drive back to our overnight stop - the Wavecrest Hotel, beautifully sited  at the dual mouths of the Ngqusi and Inxaxo Rivers. Just before we arrived, the long awaited rain settled in - just enough to make one wet, but it also damped the dust down. It was 1900 by the time we checked in - a tired but contented bunch of adventurers who met for the penultimate dinner and happy hour. It seemed we had finally tamed the sidewall snakebite.

Next week: The final day Wavecrest to Chintsa

Waterval Pass is located on a minor gravel road which connects Amersfoort in the west with Dirkiesdorp in the east, in the southern part of the Mpumalanga province. The pass is named after a farm in the area, which in turn derives its name from a small waterfall which cascades over a hollow bluff on the southern side of the road. Although a big pass by any standards (it is nearly 6 km long and gains over 300 metres in height), it is marked on very few maps and is relatively unknown, possibly because of its remote location.

Pivaanspoort (P44) KZN - This is an easy gravel drive through the valley of the Bivane river, known as Pivaanspoort. It offers magnificent mountain scenery and if you know where to find them, a few waterfalls as well.

Scheepersnek (R33) KZN - This is a minor climb over a smallish hill with two tiny changes in direction and an altitude gain of only 64m. It is located 15 km south-west of Vryheid on the tarred R33 route.

Tail piece: "I'm supposed to respect my elders, but now it's getting harder and harder for me to find one" ~ Kathleen Gordon Sellers.