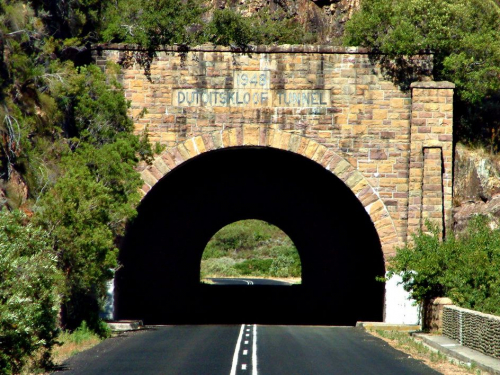 * Focus on the Du Toitskloof Pass

The Ben 10 V5 Eco Challenge was completed yesterday. By next week we will start producing the stories and action of how things went. As you read this newsletter we will be on the road travelling back from Rhodes for our overnight stop in Wilderness and then back to our HQ in Cape Town tomorrow.

If you fancy joining us for a tour, you can review what's available with full itineraries and pricing on our Shop & Tours page here:

Du Toitskloof Pass is located in the Western Cape Province of South Africa, on the regional route R101 between Paarl and Worcester. It was initially an animal track where a road was built around the time of World War II, including a 200m tunnel still in use today. Since the opening of the 3,9 km Huguenot Tunnel in 1988, the pass no longer forms part of the N1 national road and was renumbered as R101.

Originally 48 km long, the pass climbed to 820 metres. The Huguenot Tunnel, opened in 1988, is the largest curved structure in South Africa and shortens the road by 11 kilometres and is operated as a toll road. There is an impressive viaduct on the Paarl approach side, known as the Hugospoort Viaduct. It has gained some notoriety for being highly dangerous during periods of strong to gale force south easterly winds, which have the capacity to turn large trucks over. Similarly any high sided unladen delivery trucks as well as caravans have suffered this fate many times since it opened to traffic.

The surrounding peaks often sport a covering of snow and the Mountain Club of South Africa has huts in the area. Du Toits Peak is the highest mountain at 1,995 metres.

Prior to 1825, farmers used the pass to get to the interior beyond.   Another pass became the better route and in 1845, the route over the Bainskloof Pass was constructed, named after engineer Andrew Geddes Bain.

In 1930, engineer P.A. de Villiers explored the idea of a road over the pass and in 1938 it was investigated further by the National Roads Board with the route finalised in 1940.  The project was started in the summer of 1941/42.  It cost R1.25 million and was 40km long with the road being opened in March 1949 by Prime Minister DF Malan.

Anyone who lives in the Western Cape has probably driven through the Huguenot Tunnel, which cuts through the Du Toits Kloof mountains, at least once in their lifetime. Did you know that it is the longest tunnel in the country? 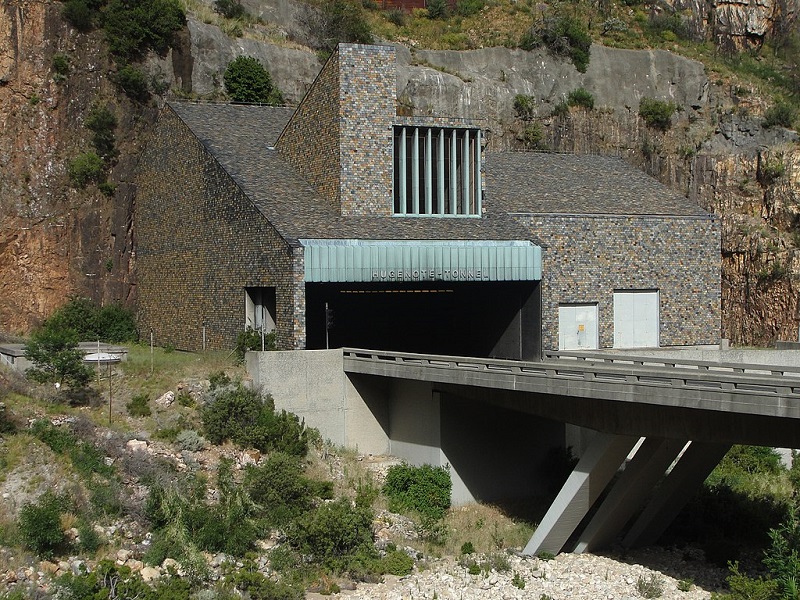 The history of the Huguenot Tunnel is closely tied to the Du Toits Kloof Pass, which is named after French Waldensian Francois Du Toit.

Du Toit arrived in the Western Cape as a refugee, along with the Huguenot family, who had fled religious persecution in France. On arrival, he acquired a piece of land to farm on from Dutch authorities. He named this farm Kleine Bosch, and it was located just below the Hawequa Mountains 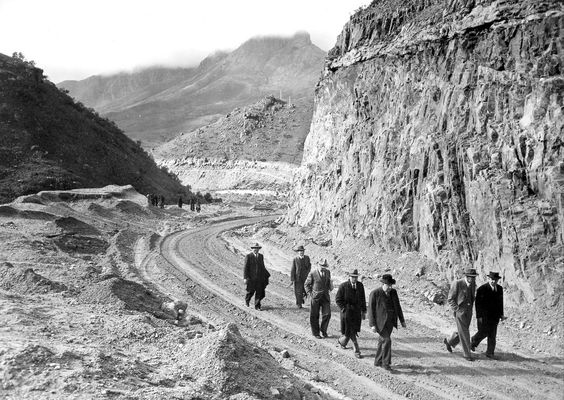 Construction in progress on the old pass circa 1943 / Photo: Hilton T

In 1778, Governor Van Plettenberg suggested that a wagon road be constructed. Four decades passed before anything came of this suggestion. A German farmer named Detlef Siegfried Schonfeldt, who was a former lieutenant in the 45th Württemberg Hussars and owned a farm in what was already known as Du Toits Kloof, approached the local farming community – which included areas such as Stellenbosch, Paarl, Franschhoek and Worcester – and suggested that a road be built through Du Toits Kloof to benefit everyone.

The money for the construction process was raised, and Schonfeldt focused on constructing his section of the road over Kleigat, which many regarded as the toughest section to build. In two short years, he had built a wagon road over it. However, constructing this particular section was expensive and depleted the overall road construction fund.

Schonfeldt approached the government for further financial assistance to complete the road. Part of the money would go to hiring at least 60 labourers to provide enough manpower to complete the project within four months.

The authorities investigated Schonfeldt’s proposal, as they believed what had already been built would be sufficient to serve as a decent road. As a result, his request for funding was turned down, but the matter was raised again in 1858 by a civil engineer named George Pilkington. Due to a lack of funding, however, the project was not revived.

Jannie le Roux, a farmer who owned a piece of land called Verdun, also built his own private donkey cart route in the area. He settled and started farming at Verdun at the end of World War I, and built this road to access his various camps. This road, however, was not for the faint of heart, and for his own personal safety he built a second road higher up on the slope. The second road was better constructed than the first, and can still be seen running 600 feet below today’s pass.

In 1935, the National Road board decided that the plans for building a proper pass had to be revived. 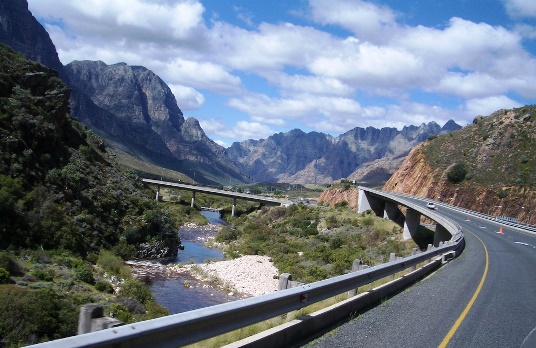 Four years later, World War II broke out, and South Africa was asked to host a number of Italian prisoners of war and approximately 10 000 were detained in Worcester.

This was advantageous, as Italians were considered among the best road and pass builders in the world. Government offered the prisoners an exchange of food and accommodation for building the Du Toits Kloof Pass. [Ed note: According to Dr Graham Ross, author of Romance of Cape Mountain Passes, very few of the Italians were technically skilled and caused the local engineers plenty of headaches. The prisoners were considered lazy and difficult. South African engineers were fully in charge of the road building project and made repeated calls to government to rather replace the Italians with local labour]

An extraordinary bond of friendship developed between the townsfolk of Paarl and the Italian POWs during the construction phase of the old pass. By 1945, the pass had nearly been completed, but as the war had come to an end, the Italians had to be repatriated. The completion of the pass was then undertaken by local labourers.

To celebrate the completion of the pass, a massive aluminium cross was carted to Huguenot Top by the Italians, and it can still be seen there today. About halfway along the southern descent (on the Paarl side) there is a spacious layby with a commorative plaque in honour of the Italian POW's. From this vantage point the cross is just visible with the naked eye, but take a pair of binoculars with for a better view.

A rush of traffic was noted on the pass in the 1970s, and in 1973, plans to build the Huguenot Tunnel were conceived. Construction started in 1984, and was undertaken in two phases. Excavation teams started at either side of the mountain and worked their way toward the centre using the drill and blast method. Support portals, along with tunnels, drainage and ventilation systems were also incorporated. 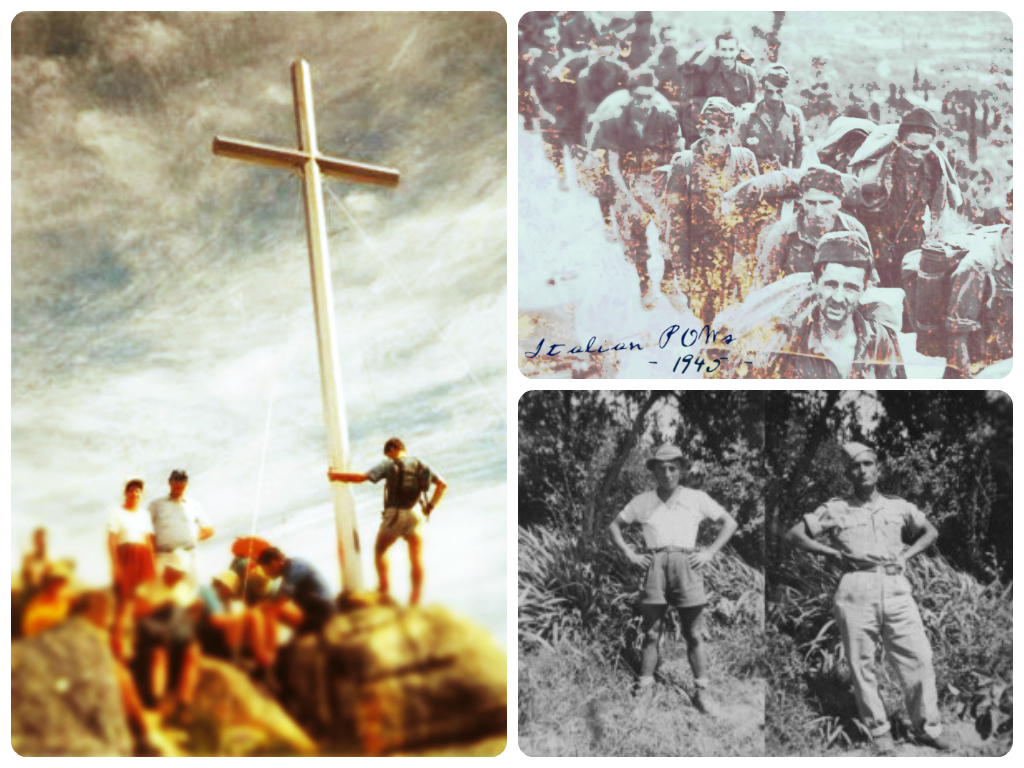 Approximately 200 labourers, 50 artisans and 15 managerial staff were directly employed at the height of the construction period between 1984 and 1987, and some 35 consultants in various professions contributed to the project between 1975 and 1988. The tunnel cost R202-million to build, and the added costs of improvements to road infrastructure on its eastern side inflated this figure to R500-million. Half a million cubic metres of rock was excavated in the building of the tunnel.

Today, traffic flow within the tunnel is monitored by 34 cameras found within, which are able to trigger an alarm in case of any emergency such as a stopped car. It is also fully lit 24 hours per day, and a powerful air conditioning system works constantly to eliminate emissions and retain high levels of air quality.

Tunnel fires are a source of concern, and while there have been a number of small fires within the tunnel over the years, only one fatality was recorded in 1994. Fire sensors can be found every 24 metres, and there are side tunnels which can be accessed for emergency evacuation.

On average, a total of 8500 vehicles pass through the tunnel daily, and peaks are usually noted during school holidays. Its highest volume ever recorded was in 2002, when 18 200 vehicles passed through on April 26.

Accidents within the tunnel are a very rare occurrence, but they do often occur before vehicles enter.

PASSES OF THE WEEK

Humour: "If I agreed with you, we'd both be wrong"