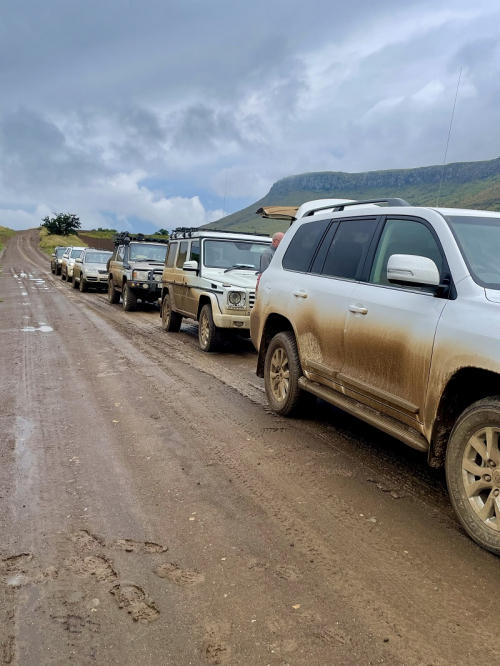 *  Fuel price and its recent history

*  Wild Coast on the horizon

In my lifetime I have seen many fuel price hikes. The most alarming one occurred in 1980 when the fuel price suddenly rose by 42%. I can remember the day very well. I was working for a General Motors dealership at the time. On the showroom floor (amongst other GM products) we had 12 beautiful Chev Constantias (V8) - the GM flagship product at the time. In the timespan of 30 days they all became worthless. The knee-jerk reaction from the private and business sector was extraordinary. Our major clients like Mobil (Engen) cancelled new car orders with an urgency that is hard to imagine. MD's of large companies handed in their BMW's and Mercs and ordered Mazda 323's and Citi Golfs by the thousands. It was the most alarming business cycle I had seen in my first 30 years on the planet.

No fuel price increase ever reached the levels of overreaction than that first one. Nowadays we have come to accept fuel price increases as a fact of life. The latest one (significantly softened by the R1.50 per litre rebate) means we can still go on holiday, go on tours and generally enjoy ourselves. Time will tell what happens regarding the Ukranian invasion, but the world economy will find alternate means of fuel supplies. It's how the bigger picture works. Don't panic. Don't over-react. Travel is still the best investment.

Our V4 and V5 Wild Coast Tours start on the 6th May and 16th May respectively. There is still space on the V5 Mbashe Tour so if you're in the mood for some adventure in an unspoilt part of South Africa, travelling in the safety of a group, you can book online here: WILD COAST V5 MBASHE TOUR. Bookings will be closing on April 15th.

Once we had turned off the R56 onto the R392, it was back onto gravel, or rather mud. The route south would become increasingly muddy as we headed in the direction of Dordrecht. The Kraai River lured us once more time down its steep sided gorge to cross via a fairly new concrete bridge.

A few kilometres later we reached the bustling metropolis of Clanville, which consists of one set of farm buildings, followed by two old ruins on the right. There is an intersection here where the left hand option traces a short cut through the mountains with some excellent scenery delivering one to the R396. This road was as muddy as a farm road can get. Things were going along nicely with no punctures for the day at that stage.

Once we connected with the R396, we turned left again to ascend the Perdenek Pass (not one of the challenge passes) to arrive at Clifford. Similar to Clanville, Clifford is essentially just a farm, where locals get together from time to time for social events like shooting, archery, melktert and moerkoffie.

Clifford marked the start of the worst mud we have ever experienced on any of the previous Ben 10 Tours. It was a case of applying 100% concentration as we slithered our way southwards for 18 km of non-stop slipping and sliding. There were one or two instances of vehicles sliding off the road and into muddy ditches, but in each case self-recovery was all that was required. All the drivers earned their mud-driving badges and then some! 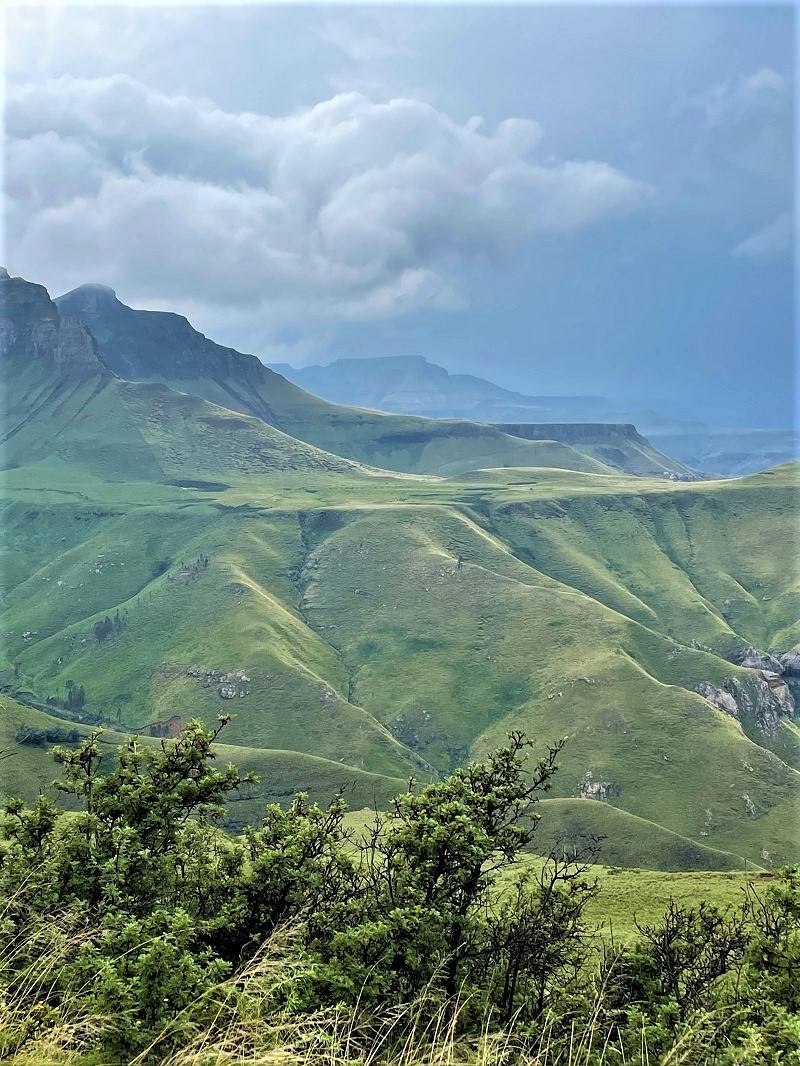 Despite the rain, the views from the summit of the Otto du Plessis Pass were amazing / Photo: MPSA

Otto du Plessis Pass beckoned. This pass is not to be trifled with and based on the levels of water saturation we had just experienced, I knew that the eastern side of the mountain would be even wetter. We approached with caution, easing our way to the summit, which was mercifully under the cloud base, allowing for some reasonable photography. It kept raining the entire afternoon.

The big descent to the Tsomo valley can be very challenging. The word spectacular describes this pass perfectly. It has all the elements of a classic gravel road pass of intrigue, danger, amazing views and technical driving. This pass ranks in position 31 nationally in the 'most altitude gained' category with a walloping 658 vertical metres!

The pass was named after Dr. Otto du Plessis, a popular political figure at the time (MP for Stellenbosch and later Administrator of the Cape) and one time Minister of Health. He was born in 1907 and passed away in 1960. There is a hospital near Bredasdorp named after him, as well as the road down the Gamkaskloof to Die Hel, which also officially bears his name. One of the main roads in Cape Town's Atlantic suburbs is also named the 'Otto du Plessis Drive'.

There is one section where wash-aways have eroded large sections of the road and precise lines have to be chosen to retain traction. We went down in low range with diff-locks on; gingerly working our way down the steep slopes. Once we got to the main waterfall, the mud eased off a lot and the hard exposed gravel provided much improved traction. 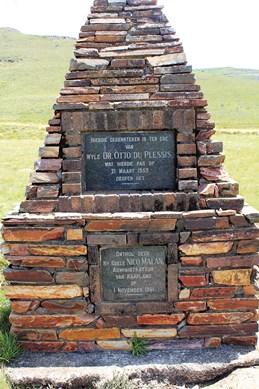 Plaque and stone memorial at the summit / Photo: MPSA

Towards the base of the pass on the Elliot side, (similar to Bastervoetpad Pass) we had four stream crossings to contend with. All of them are over the same river which was flowing strongly, but not too deep to make it dangerous. Heavy black and silver wattle infestations have grown over the road. We mentioned this last year as being one of the factors that are making things increasingly difficult for road users (including the farmers). Take note Eastern Cape Tourism: A team needs to be sent to clear the wattle and some road maintenance is urgently needed.

Once we were down in the Tsomo Valley, we were able to pick up the average speed a bit, as we enjoyed the muddy drive through to Elliot. It started raining heavily again as the afternoon light starting fading into gloom. Our route to reconnect with the tarred R58 just north of Elliot involved driving through one of the local townships called Pola Park. By the time we arrived it was almost fully dark and still raining hard. Cattle, goats, sheep, pedestrians and traffic (without lights) made things dangerous. I called for the convoy to lower their speed and be on high alert.

What we didn't know, was that the local council had recently resurfaced the short section of roadway (about 500m) between the R58 and the start of Pola Park with a thick layer of clay. It turned the road surface into an ice rink. Even 4WD vehicles were having a torrid time staying on the road. We noticed a Mahindra bakkie ahead of us sliding sideways down the road towards the R58 with the driver having no control whatsoever. I sent out the message over the radio for eveyone to be extremely careful. A couple of our vehicles experienced the same predicament, but fortunately we all made it through unscathed. Scary stuff.

All that remained was an easy drive up the beautiful Barkly Pass to get back to the Mountain Shadows Hotel with its warm fire in the pub, welcoming back the Ben 10 adventurers. We had completed half of the challenge passes, but some tough ones were still waiting for us. There were a few ashen faced guests in the pub that night, retelling their alarming experiences!

And so ended the third day of the tour with plenty of action, adrenaline and excitement (and no punctures).

Our featured pass this week is naturally the Otto du Plessis Pass. If you've never driven it, you can get a feel of what it's like by watching the video set via the link below.

Tail piece: "He was a bold man that first ate an oyster" ~ Jonathan Swift