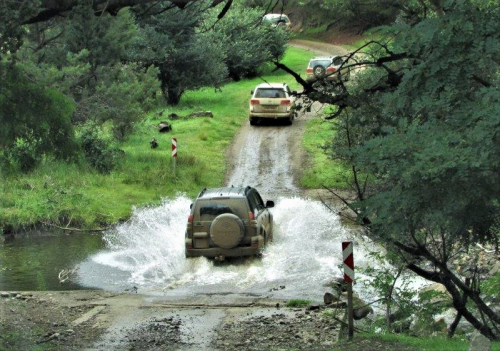 One of many river crossings - Photo: MPSA Tour Group

* Affected areas along the Wild Coast

There is still one ticket left for the Swartberg Classic Tour in July.

Use the links above to review the itineraries and pricing.

A massive amount of damage and a tragic loss of life (mainly in the KZN coastal region) marks another dark period for the beleaguered province, but in the true South African spirit, communities are standing together and helping out with beach clean ups and other damage. Some areas are still without water and electricity. There has been criticism in the media and on social media as to how government have been slow/inept in responding to the disaster.

Further down the south coast, the damage was less, but the entire section down to East London, also received lots of rain with numerous reports of flood damage. With our Wild Coast Tours coming up in less than 2 weeks' time, we made a series of phone calls to the various venues we use to establish if roads, water, sanitation and electricity supply was intact.

Everyone is working flat out to ensure full services are in place. We might have to come up with some alternative routes to our usual ones, should there be significant flood damage to roads and/or bridges. It certainly adds some additional excitement to the tour! We will do our best to report on conditions via these newsletters (we will be in the Wild Coast for 24 days in total), as well as via our social media pages. 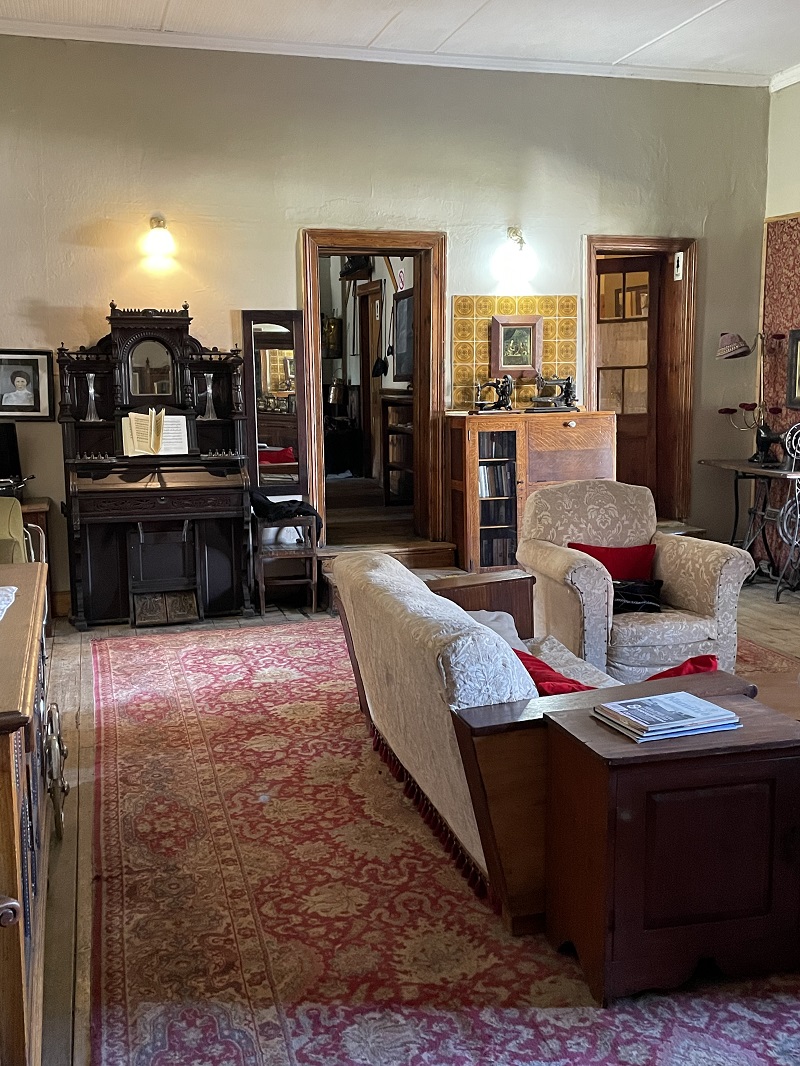 The lounge in the Rhodes Hotel exudes an era from 120 years ago / Photo: MPSA

First of all we needed to backtrack all the way to the Wartrail Country Club, which again served as our first comfort break for the day. From there we took the road along the Funnystone River. This drive is particularly pleasant through tall rows of Lombardi poplars and tranquil farms. Before long we arrived at the start of the first challenge pass of the day – Volunteershoek.

We knew it was going to be tough and muddy, but the recent road repairs done by the local farmers, meant we had many water diversion mounds to contend with. These were sharp and high, which means using momentum was impossible except for the Suzuki Jimny with its short wheel base. For everyone else it was a matter of pausing briefly at the top of the mound and inevitably going into a slide on the far side. We were all fully cognisant of doing as little damage to the road as possible, so everyone was asked to engage their rear lockers and remain in low range. 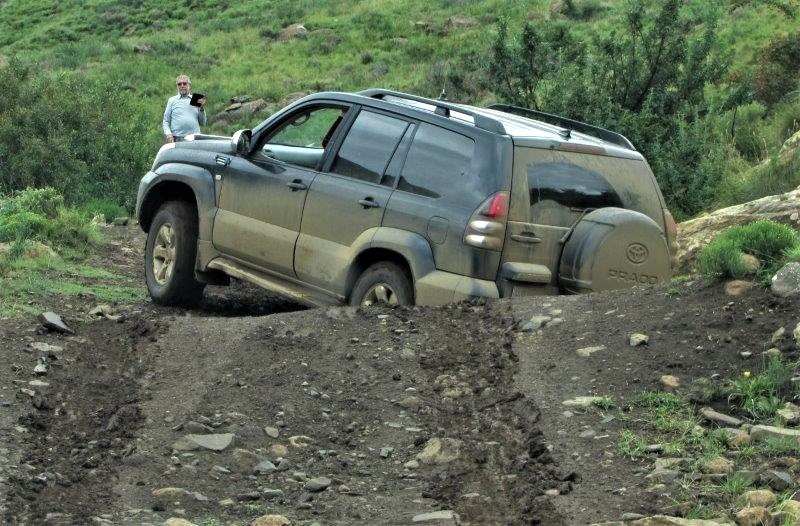 The first part of the ascent up Volunteershoek was very technical but also lots of fun, as we got the whole convoy up the trickiest section. Then came those sections where the farmers have tried to stabilize the road by embedding old tyres into the road surface. They actually look much worse than what they are in reality and even the vehicles with the lowest ground clearance managed to cope with them.

Eventually we were at the summit, where we stopped briefly to celebrate having conquered challenge pass #7. Up at that altitude of around 2600m ASL the air is crisp and clean allowing one’s vision to stretch over the endless rows of mountains cutting across the landscape. There are no trees – just lots of grass. The good grazing means livestock will be on the road, but by the final day of the Ben 10, the cattle and sheep become a normal part of the daily driving.

The drive from the summit of Volunteershoek Pass to Tiffindell is about  16 km but it takes an hour to cover it as the track follows a ridge into the east with the looming bulk of the Maloti range keeping guard to the left.

The route passes over the dam wall of Loch Ness, which is the highest altitude still water fishing spot in South Africa and soon intersects with the road to Tiffindell.

We still had the TTT (Tiffindell Tenahead Traverse), Naude’s Nek and Carlisleshoekspruit passes to complete and not enough daylight hours left, so we slashed the time for lunch to mere minutes and headed directly to the first gate of the TTT.

The TTT offers incredibly beautiful scenery and is reputed to be the highest contour road in South Africa, more or less following the 2600m contour line. 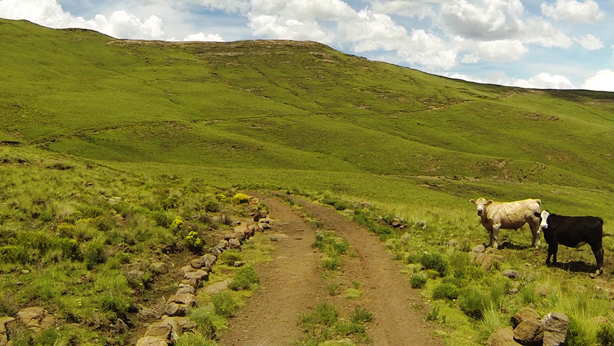 It’s a tough drive in anyone’s book (for drivers and especially passengers) as vehicles tend to roll a from side to side a lot. It takes about 2,5 hours to complete it and we find it makes guests weary, as was the case with some of our guests, who wanted to throw in the towel when we reached the Tenahead Lodge. It took some persuasive talk to convince them to tough it out and complete the last two passes. It had started raining again, further dampening flagging spirits.

Next up was Naude’s Nek Pass. There were no real problems as the road surface is generally quite good and by 17.45 we were close to Rhodes. We had one more pass to complete, which was the Carlisleshoekspruit Pass. With the rain falling steadily and natural light fading fast, we tackled the very steep pass, turned around at the summit (no easy feat with 13 vehicles) and descended in darkness to arrive back at the Rhodes Hotel at 19.30. A weary, but proud group, we had not only completed the official Ben 10, but also several additional passes.

At dinner time it was time for our usual Chappies Awards, where all manner of unusual fun awards are dished out – all in good jest. Next year’s Ben 10 will probably be held over Easter. The rain continued all night long, resulting in an adventurous trip home over several flooded bridges and causeways.  Our inaugural Ben 10 Tour was also a wet one, but this tour was another level higher. Congratulations to all the drivers and passengers.

This is a complex contour road offering four small passes along its 27 km length. The road generally remains at the 2600m contour level and the vast majority of the route comprises contour road driving as it follows the shapes of the hills and buttresses. The route is doable in a high clearance 4x2 with diff-lock, but when things get muddy or snowy, it is definitely a 4x4 route. Although the road gets quite rough in places, these don't last long and most of this route is Grade 1 to 2. The road connects the Tiffindell Ski Resort in the west with the Tenahead Mountain Lodge in the east, and provides a shorter, but slower alternative to the Naude's Nek Pass.

Quote of the week:   "The problem with the world is that the intelligent people are full of doubts, while the stupid ones are full of confidence" ~ Charles Bukowski