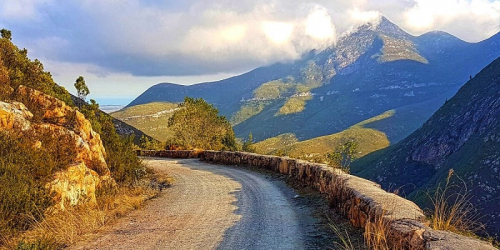 As you read this newsletter we will be on our way to Cradock for our first overnight stop en-route to Matatiele where we will be meeting our first group of guests for the long awaited Wild Coast V4 Pondoland Tour. The two back to back tours cover a period of 21 days away from HQ and that equates into a trunk full of careful planning; writing newsletters in advance and ensuring the social media treadmill gets fed its daily rations.

As always we will be returning with fresh photos and videos and as a bonus, now that we are more intimately familiar with the Wild Coast, we plan on filming 19 new passes along the route, which we will process over the period June to December.  We will divulge all our best passes to our subscribers.

We have just launched the Garden Route Classic Tour. Please note that we have deviated from our usual "per vehicle" pricing system to a "per person" system. Over the last few years we have monitored the number of passengers per vehicle. The vast majority book for 2 people, then there are the single drivers and by far the minority are those with more than two people in a vehicle. So we did some head scratching and came to the conclusion that it would please most of our guests better (especially the solo drivers) if we charged per person. We will be keeping an eye on bookings and monitor the feedback from guests. For two people the rates will be much the same as they were before, but for people with 3 or 4 in a vehicle it will be more expensive.

Progress on the Seven Sisters Tour is taking shape nicely and it should go live for online bookings towards the middle of June. We already have a number of pre-bookings for this tour. If you want your name to be added to the early bird list, send us an email at This email address is being protected from spambots. You need JavaScript enabled to view it.

In 10th place is Caledon in the Overberg which was established in 1811. This one catches many people by surprise.

Caledon is situated on the N2 national road in the Overberg region in the Western Cape province of South Africa, located about 113 kilometres east of Cape Town next to mineral-rich hot springs. As of 2011 it had a population of 13,020. It is located in, and is the seat of, the Theewaterskloof Local Municipality.

The town has a Mediterranean climate of warm, dry summers and cool, wet winters. Temperatures are modified by its close proximity to the South Atlantic Ocean, just over the Klein River Mountains to the south. The place was originally known in Dutch as “Bad agter de Berg” (Bath Behind the Mountain). A bath house was built in 1797 and a village called Swartberg sprang up, which was later renamed Caledon in honour of the Irish peer Du Pre Alexander.

Caledon is famous for its hot springs, discovered by the early Khoi-Khoi people before the Europeans attributed healing properties to the iron-rich waters and opened a sick house and later a sanatorium, which was destroyed by fire. The seven springs, one of which is cold and the other six thermal, are warmed by contact with rocks heated by pressure deep under the ground to a steady temperature of 49.5° Celsius. Interestingly, the waters of Caledon are also free of any organic matter and when submitted, in 1893, to the Chicago World Fair, they were awarded first prize as the world’s top quality mineral waters. The Caledon district is primarily an agricultural region.

Most agricultural activities involve grain production with a certain amount of stock farming. The town is locally well known for the Caledon Spa and Casino and for its rolling hills and yellow canola fields in spring. The Caledon wild flower garden is world-renowned and forms part of a reserve at the entrance to Venster Kloof, so called because of an interesting rock, which looks like a window. 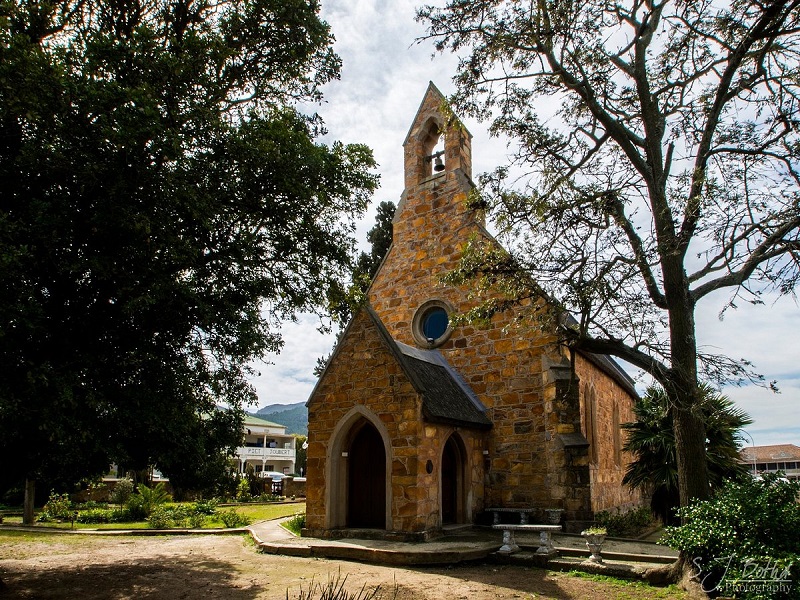 The Caledon garden has an annual show during September at the time of year that best displays the abundant array of indigenous wild flowers that bloom in this season. You can hike through the Nature Reserve to experience the indigenous fynbos vegetation, indigenous trees, prolific bird life and flowers, as well as the gorgeous mountain views of the Swartberg.

The town of George is central to South African Garden Route in the Western Cape province. It is the first town founded under British rule - and was named after the reigning monarch in 1811, King George III. The Outeniqua forests were the reason the Dutch East India Company, in 1776, established a woodcutters outpost on the site of what became George in 1811. It was declared a drostdy by the Earl of Caledon on 23 April 1811. George gained municipal status in 1837.

Walking down York Street (named in honour of the Duke of York, second son of King George III) two doors from the library, is House Crowther, one of the last survivors of the stately homes which once flanked York Street. Dr Charles Owen-Snow, who practiced as general and district surgeon from 1895 to 1940, lived in this distinguished home with his family. Medical instruments used by him are on display in the museum.

Walking down York Street (named in honour of the Duke of York, second son of King George III) two doors from the library, is House Crowther, one of the last survivors of the stately homes which once flanked York Street. Dr Charles Owen-Snow, who practiced as general and district surgeon from 1895 to 1940, lived in this distinguished home with his family. Medical instruments used by him are on display in the museum.

During 1812 two missionaries from London, namely James Read and William Wimmer visited Hoogekraal near George. Kaptein Dikkop, leader of the Khoikhoi tribe living in the area, was so impressed with their work that he invited them to come and live and work amongst his people. 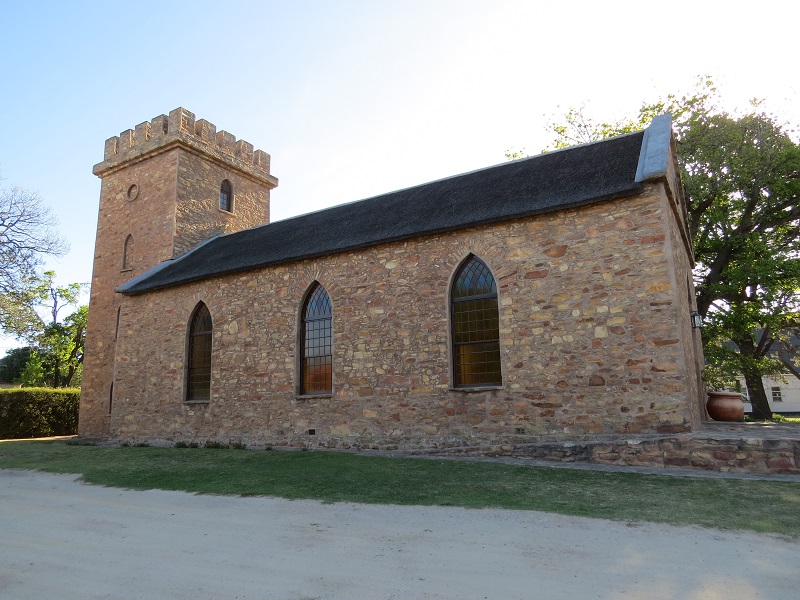 A well preserved church in Pacaltsdorp

Pacaltsdorp is richly endowed with historic buildings. An impressive site for visitors is the unique Norman-style church with its meter thick rough stone walls. It was originally built from stone, yellowwood, glass and clay. From the tall, square battlemented Norman tower, kilometres of countryside may be viewed. The "Pata Huisie" as it became known during 1922, was constructed in approximately 1813 by Rev Pacalt as his second mission cottage. Consisting of sod walls, a thatch roof and cow-dung floor, it was declared a national monument in 1976. William Anderson built the first manse, next to Pacalt’s little two roomed cottage. A two-storied building with thick stone walls and abundant yellowwood, it was also declared a national monument in 1976.

The ancient English oak in front of the Old Library is one of the original trees planted by Landdrost van Kervel when he laid out George Town in 1811 which withstood the test of time. It is now known as the ‘Slave Tree’ because of the old chain embedded in the tree trunk and the old lock attached to it. The Slave Tree is said to be the biggest oak in the Southern Hemisphere and has been declared a National Monument.

Perhaps one of the loveliest sights is the Dutch Reformed Church at the head of Meade Street framed by the gracious oak trees which line the street with the mountain as a backdrop. The cornerstone of this historic "crosschurch" was laid by the Rev Johan SS Ballot on 14 April 1832. The excavations for the foundations were six foot deep by five foot wide so as to "bear the heavy burden" of walls three foot thick 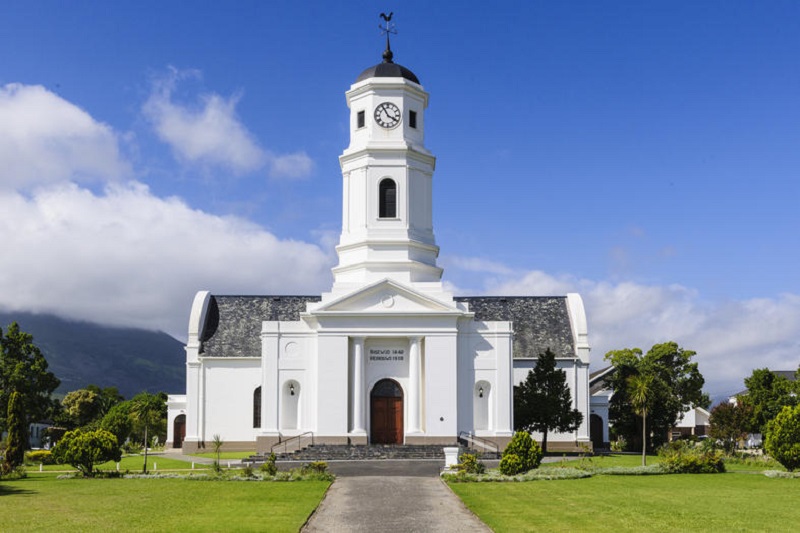 Building material consisted of 180 wagon-loads of foundation, paving and flat stones and 1,896,756 bricks. Bricks made by members of the congregation in their own kilns have not been taken into account.

The enormous amount of yellow-wood (the ceilings, the pillars supporting the galleries and the panelling of the galleries) and the stinkwood used came from local forests, Plettenberg Bay and Knysna. The teak door of the main entrance was brought from Cape Town to George by oxwagon. The pulpit, designed and constructed by Mr Heyns who finished the task in a year, is made from local stinkwood at a cost of R400. The original roof was made from reeds which, like the lime used in the building, came from Riversdale.

Disaster struck the community when the church steeple collapsed on 13 September 1905. Rain had been blown through the open windows for years and had weathered the woodwork and weakened the walls to such an extent that the ten inches of rain that fell during three days caused the brickwork to crumble. The present bell was bought at the time of reconstruction and the London firm of Philipson and Stow presented the steeple clock.

In more modern times George has played host to the International Seven Rugby Series and today lays claim to be one of the fastest growing cities in South Africa. It's fairly close to several beaches, the Garden Route, has first class medical services, shopping malls, an amenable climate, plenty of rain (despite a recent drought) and a location set under the magnificent Outeniqua Mountains.

The Outeniqua Pass has had its fair share of drama, accidents, rockfalls and landslides over the years, but continues to provide one of the best tar road pass driving experiences. Take the link and enjoy the cyber drive.

Tailpiece: "When you combine an exclamation mark with a question mark ?! - it's called an interrobang".