* Arrival of the railway yards

Over the next few weeks these newsletters are coming to you pre-written whilst we are on tour along the Wild Coast, and as such do not follow our normal format.

This probably comes as something of a surprise to learn that the 8th oldest town in South Africa is Uitenhage. It's the second oldest town in the Eastern districts of the former Cape Colony. Founded in 1804 by Jacob Glen Cuyler, the town was named in honour of the Cape Commissioner-General Jacob Abraham Uitenhage de Mist. It was originally part of the Graaff Reinet district, and was known as the administrative border for the Cape Colony.

When the Cape Commissioner-General split the two districts in half, Uitenhage was named a prime location for timber farming. Its abundance of water and picturesque setting made it quite popular, and the climate was regarded as so healthy that Cape Town patients were recommended by their doctors to recuperate there.

Over the next few decades the town grew steadily as English-looking and Georgian white houses sprung up accompanied by beautiful little gardens and a number of important buildings like the post office. The town’s first Dutch Reformed Church was built in 1843, and the Zwartkops River became the epicentre of the area’s wool washing industry.

Uitenhage became a municipality in 1877. Soon after, the construction of a railway line and station began, connecting the town to other parts of the Eastern Cape and beyond.

A proper town hall was erected in 1882, as well as a library and new school building. A number of new religious buildings also sprang up in the 1890s, including St Katherines Anglican Church, St Joseph's Roman Catholic Church, the Congregational Church and the Wesleyan Jubilee Chapel.

Vee Double U and me

By 1910 Uitenhage was a thriving town with a healthy economy built on agriculture and railway industries.

Uitenhage is known for the large industries situated there. The largest of these industries are the Volkswagen of South Africa and Goodyear factories. An automotive supplier park, Alexander Park Industrial, has also been created directly next to the Volkswagen factory, thus allowing automotive component manufacturers to construct their manufacturing plants close by.

In Uitenhage you can still find buildings from the 1800's in their original form. The Old Drostdy Museum built in 1809 is now the home of the Uitenhage Africana Museum. It is the ideal setting through which to experience the history of Uitenhage.

The Old Railway Station built in 1875 which is reputed as one of the oldest railway stations in South Africa is another historical attraction found in Uitenhage. Vintage locomotives, a variety of coaches and period furniture and equipment are on display in this museum.

The Cuyler Manor Museum is a living museum that arranges demonstrations of traditional activities like soap and candle-making, baking and weaving. 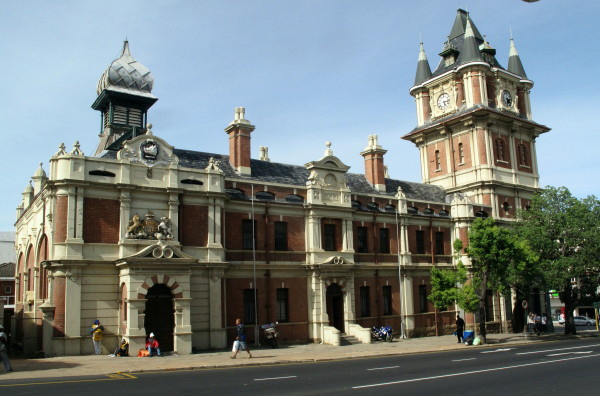 The Groendal Wilderness Reserve is also situated in Uitenhage. The reserve is the perfect place to go on a hike or have a picnic while listening to the birds singing.

Known as the Garden Town, Uitenhage was first a farming community on the banks of the Swartkops River. Now it is a thriving commercial and industrial town but has managed to keep its picturesque beauty.

In 1804 Commissioner-General Jacob Uitenhage de Mist undertook an extended survey of the border regions of the Cape. As a result of this he put forward a number of proposals aimed at improving colonial administration over these areas. One such involved the separation of the eastern regions, then falling under Swellendam and Graaff-Reinet, and their consolidation into a new administrative district. This proposal was accepted and on 25 April 1804 the Governor of the Cape, JW Janssens, proclaimed the new district of Uitenhage, and named it in honour of De Mist. The task of finding a suitable location for its administrative centre was entrusted to Captain Ludwig Alberti, Commanding Officer of Fort Frederick at Algoa Bay.

His choice fell upon the Zwartkops River valley, a green and fertile area about 40 km north west of Algoa Bay, which was first settled by the Dutch in 1790. In November 1804 the farm Hartebeeste River, belonging to the widow Scheepers, was purchased by the Government and became the site for the new village.

As it ultimately transpired, Alberti's choice of the site was excellent and, over the years, visitors to the town have found cause to praise its many advantages, all the more so after the discovery of a reliable and abundant source of water from local springs. La Trobe (1818) and Steedman (1835) were impressed with its picturesque setting on the bank of the Swartkops River, and its climate was regarded as being so healthy that Cape Town patients were often referred by their doctors to recuperate there. 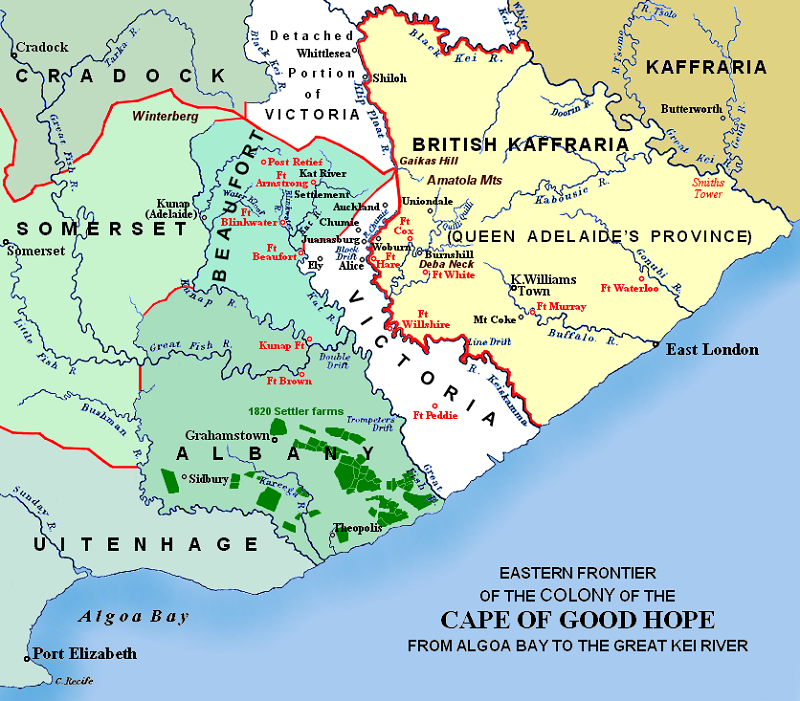 When Alberti originally laid out the town, his military background was clearly evident in its plan, which closely resembled that of an army camp. The boundary was set out in a square with the Drostdy steps at its geometrical centre. The symbolism of this was clearly evident, and differed markedly from the plan normally adopted by Dutch colonial settlements of that time which centred upon a village church and its attendant nachtmaal square. In this case also, a stretch of agricultural land, which was always attached to a Drostdy to allow the Magistrate to supplement his meagre salary, was allocated directly in front of the Drostdy, thus setting some distance between the main administrative buildings and the growing settlement below.

The initial aspect of Uitenhage therefore, must have been more like a manorial estate than that of a colonial village. Understandably, the presence of a farm in the heart of the settlement prevented urban development from taking place in the southern quadrant of the town for a long time thereafter. At the outset only four streets were laid out: Cuyler, John and Baird Streets intersecting at right angles with Caledon Street.

In 1811 Uitenhage became the focus for military operations against the amaXhosa in the frontier war of 1811-12, and in 1815 its garrison played a leading role in the suppression of the Slachter's Nek rebellion. However the benefits of a military economy did not stay with Uitenhage for very long, and as the frontier of the Cape was pushed ever eastward, so then the lucrative military and black tribal markets moved, at first into the Albany, and then into British Kaffraria.

Originally, in order to encourage settlement in the new town, plots of 1 morgen, or approximately 2.1 acres, were offered free to new residents, on the condition that they be built upon within 6 months of their grant  These conditions were changed after the British Occupation in 1806 when a price of 30 rix-dollars was set per plot and construction could take place within 18 months of purchase. After 1814 plots were sold by public auction . Despite such favourable terms, the demand for stands remained low and by 1813 only 31 plots had been sold and about 20 houses erected, all of which were concentrated in Cuyler and Caledon Streets . At the same time work was begun on the construction of the necessary government buildings for the administration of the new district. These included a Drostdy, built in 1804-1809, a prison in 1811-12, the court house in 1813-15, the Messenger's House in 1813-15, and the house of the Secretary, in 1813-14, all of which were designed in the prevailing Cape Dutch idiom of the time. All of these were located on the upper side of Caledon Street, resulting in a row of public buildings looking down upon the residential area to the south west.

The prosperity of the town continued to be based upon the sale of fresh produce until 1843, when a number of wool-washeries began to be established on the banks of the Zwartkops River. The first factory was erected by FH Lange, but the extreme softness of the local river water soon led others to follow his example: Peche in 1846, Christian Heugh and John Lear in 1849, Niven in 1861, Marshall and Appleby in 1865, Thomas Witheridge Gubb (Riverside) in 1866, and Henry William Inggs (Springfields) in 1867. Uitenhage's "Snow White", as the washed wool became known, became internationally known, and in due course the town became the main centre of wool-washing for the Cape.

In the more recent history the town became well known for its excellent schools and in 1947 Volkswagen moved in to the area to set up the biggest motor assembly factory in the southern hemisphere and remains the major employer in the area. Other industries like tyre and component factories followed suit, elevating the town permanently into the international industrial arena.

The nearest mountain pass to Uitenhage (Kariega) is the Van Stadens Pass. The link below will take you to the pass page where you can read up on the pass as well as watch the video.