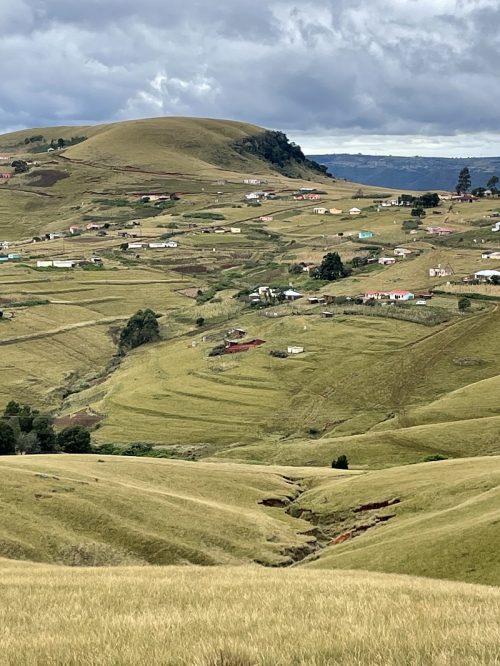 * Changes to our pricing system

Having a number of years tour administration under the belt, we have established that every tour produces a number of solo drivers. One of our strategies that set us apart from the tourism industry is that we originally charged per vehicle and not per person. The reality is that very few vehicles have more than two occupants. The ratio is perhaps one every second tour, whereas the incidence of solo drivers is usually at least 2 on every tour. In an effort to make things more equitable for solo drivers, we have created a single supplement rate, which is about 80% of the old rate. To still make it affordable for vehicles with more than two people, we have a rapidly declining cost curve for that bracket, which is still very affordable - plus we have added in a zero cost for children under the age of 18, which makes the tours more accessible for families. The new system is already in place, so when you book, you will find a drop down menu that looks like this:

The system automatically calculates the price according to your category of choice.

We launched our Wild Coast V6 Tour (May 2023) yesterday and already 6 of the 12 places available have been taken. If you want join this incredible adventure, here is the itinerary, pricing and booking link:

The Garden Route Tour is a brand new tour which we are running in September and showcases the best of Thomas Bain's work (including Prince Alfreds Pass, Bloukrans Pass, Grootrivier Pass and Robinson Pass) plus of course all the major passes like Outeniqua and Montagu passes. We have also included the Old Voortrekker Pass from Louvain in the north to Bergplaas in the south to add a small dollop of offroad driving into the mix. The five day tour criss-crosses the mountains from west to east from Mossel Bay to Storms River with many points of interest added in; photographic hotspots, forest walks, animal sanctuaries, great food and first class accommodation. We have 8 places available. Detailed itinerary, pricing and online booking on the link below:

In the middle of July we will be tackling the Swartberg using our unique routing that offers the very best of the beautiful and challenging Swartberg mountain range. The tour starts near Swellendam and includes 39 passes over the 4 days including the big ones - Swartberg Pass, Gamkaskloof/Die Hel, Meiringspoort, Seweweekspoort, Gysmanshoek and Rooiberg passes. This mid-winter tour is going to be special with a good chance of doing some snow driving.

We have had a number of requests for novice 4x4 training which will only be available for people living in the Western Cape. Details to be published soon. 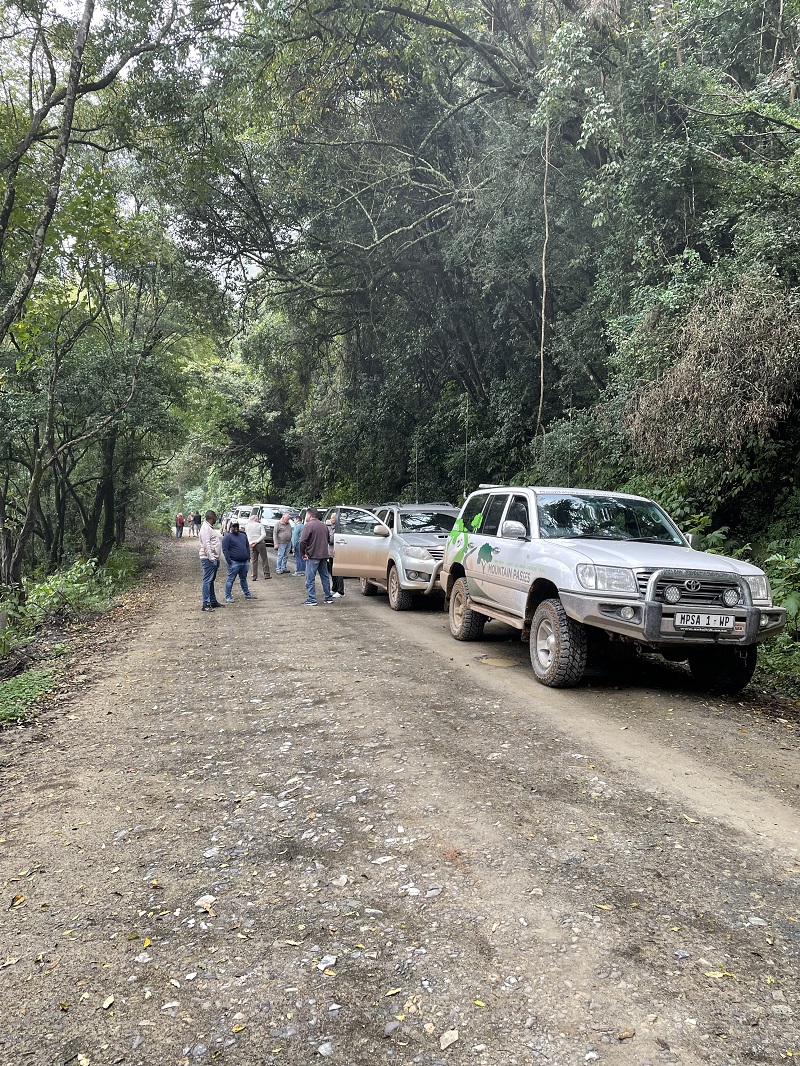 Last week our story ended at Tabankulu. The road that leads to Mvenyane village and the Mzintlava Pass (the highlight of the day) has taken a lot of punishment with all the recent rain. Quite how the locals manage to drive their normal cars and 2WD bakkies over those roads remains a mystery. The distance from Tabankulu to the start and summit point of the Mzintlava Pass is only about 5 km but our average speed was well below 20 kph as we dodged the rocks, ruts, washaways and mud. Once on the pass itself, the road condition improved considerably.

The heavy rain that we had experienced at Matatiele earlier had moved on towards Durban leaving us with dust free roads (a euphemism for muddy) and by lunchtime we pulled over for a break inside the KuGomo indigenous forest. We choose the same spot each year as it always delivers what we promise our guests. It's not so much the idyllic birdsong and dappled light filtering down through the forest canopy, or the burbling sounds of rivulets running down the slopes, but rather the engagement with the locals. 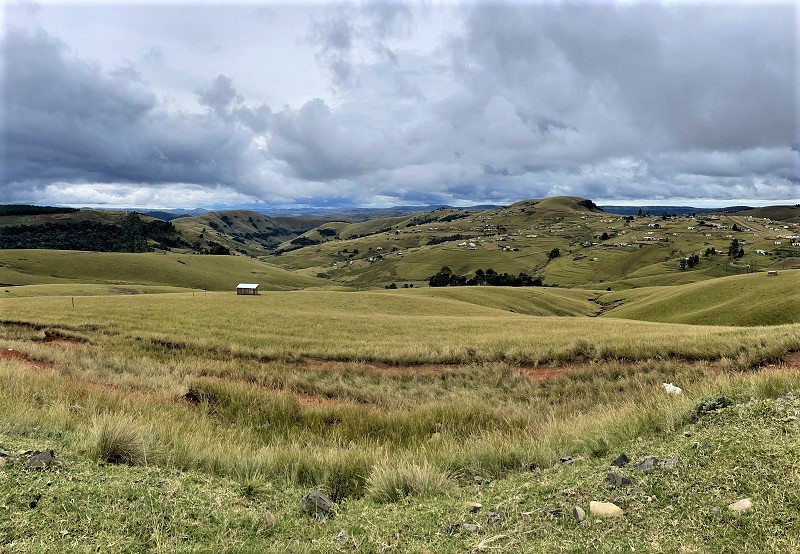 Even on a rainy day the scenery was fabulous / Photo: MPSA Tour Group

The village of Mvenyane lies on the southern side of the forest and a steady trickle of vehicles plies the road to Tabankulu to buy provisions and food. There is nowhere else quite like it in South Africa. When the locals pass by there is waving, smiling, blowing of hooters and singing. Some stop and have a chat with us. It is this interaction which is so enjoyable to experience. The genuine friendliness and welcoming nature of the locals is an experience that leaves you feeling a whole lot better about South Africa.

Several kilometres later the descent of the Mzintlava Gorge commences. We always stop at this spot for some photos and a leg stretch. The scene displayed out before you ranges from a few colourful huts on the steeply sloping hills, to a beautifully tall, spindly waterfall (which was flowing  nicely after all the rain), whilst further to the right the mountains drop away steeply to display the brown ribbon of water that formed this grand landscape. Locals pop over and take photos of us with themselves. They all have mobile phones. It sets the tone of yet more friendliness as we pose for them. Our Xhosa vocabulary expands with each tour.

How to drive in the Wild Coast 101 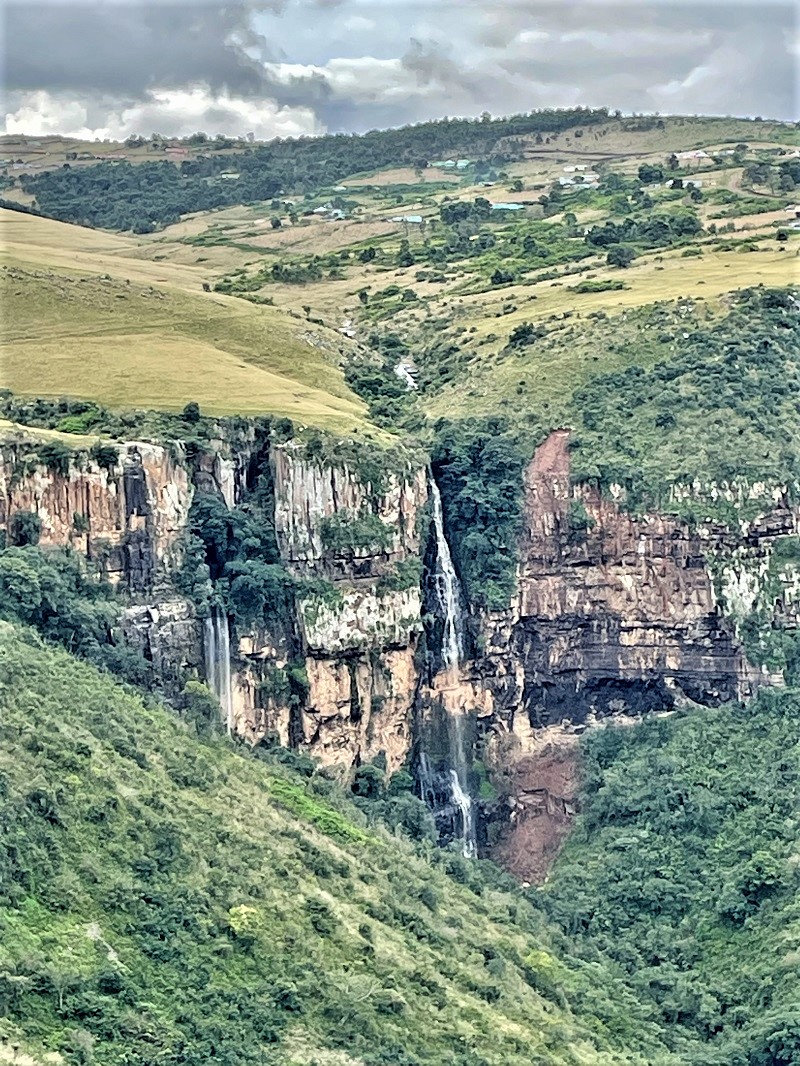 At the start of the major descent of Mzintlava Pass / Photo: MPSA

The descent begins as the views open up of the river far below twisting its way around the ridges and buttresses, winding its way coastwards in the most convoluted route imaginable; then somehow appears on the opposite side of the road without having crossed it. It can get quite confusing, but it's the same river that winds its way towards its destination where it meets its big sister, the Mzimvubu River some 20 km downstream. This scene is like a smaller version of Colywobbles. More villages pop up on the right hand side of the road and the never ending task of dodging livestock continues. Getting past approaching vehicles is a bit of a challenge, often requiring mirrors to be folded in and at least one of the vehicles having to drive partially up an embankment. But everyone is friendly, patient and kind. 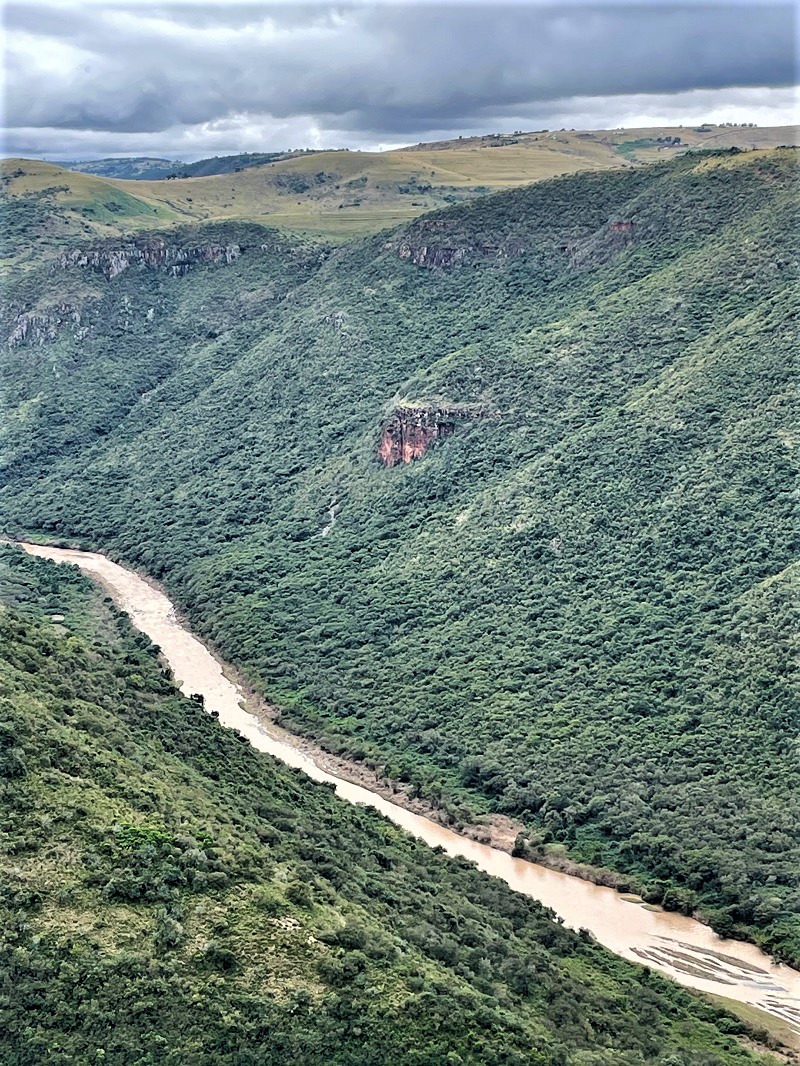 The powerful Mzintlava has carved a canyon of note through the mountains / Photo: MPSA

Finally we crossed the river via a single lane concrete bridge and it was time for more photos and a leg stretch. The weather seemed uncertain about clearing or raining, so we soldiered up the southern side of the pass - a huge climb of over 800m. The scenery is stunning, with flowering aloes, green hills and the omnopresent colourful huts. The cattle are fat and we didn't see a single skinny dog in this area. At this stage all the vehicles had a thick coating of mud mixed in equal proportions with cow dung clinging to the fender linings and undercarriage. After the second day you stop avoiding the cow pats.

Lusikisiki (The sounds of the reeds rustling)

All too soon, we intersected with the R61. It's something of a culture shock being back in heavy traffic after the peaceful day of gravel we had enjoyed. I warned our guests to sharpen up and be aware of a host of fresh dangers - like the crazy multiple speed bumps - many invisible or the warning signs have gone missing - and when the roads are wet they are even harder to spot. Fortunately our drivers were putting the two radios to good use to warn each other of the various obstacles as the suburban sprawl of Lusikisiki came into view some 40 km later. Despite it being the main trunk route up the coast, it's a slow drive with the constant braking and acelerating required to get to keep up a reasonable average speed. The locals brake suddenly and without warning, so one has to stay very sharp.

Lusikisiki is like Tabankulu on steroids and according to one of our guests Flagstaff is worse than both those two towns put together. The roads are badly potholed in town and traffic congestion is heavy. Construction work, mud and cattle just added to the chaos. Finally we got the entire group to turn off onto the concrete road to Mbotyi. That is quite an achievement as with all our previous tours, we have had guests missing the turn-off despite detailed instructions over the radios.

Once a guest goes walkabout (or drive-about) it usually takes several minutes before his/her absence becomes noticed. If he is already out of radio range it is a serious mission locating the missing vehicle, so we tend to be very particular about taking care of the vehicle behind.

The road down to Mbotyi has worsened considerably, with too much rain being the culprit. After checking in at Mbotyi River Lodge, we got the bad news. No electricity. This wasn't load shedding. It was a local outage and no concrete answer as to when power would be restored. It didn't present too many problems as the geysers were still hot and the lodge's generator kept the lights burning in the pub and restaurant. Thank goodness for Tikka Lights back in the rooms! 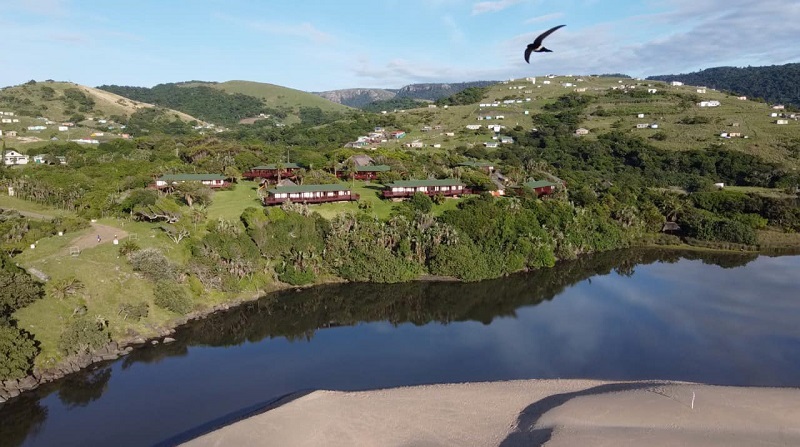 The electricity issue would remain for the whole of the following day, by which time there was definitely no more hot water. To make matters worse, the lodge's generator packed up, which had the young manager scrambling to keep his guests happy in 100% apology mode. The lodge was full with two hiking groups as well as the MPSA group, but no-one was whinging too much as we settled down to a candle lit happy hour. Then at almost exactly 7pm the power came on. The jubilant staff spontaneously broke into song and cheering.

Next week: Some enjoyable hiking and a really bad 4x4 track to the coast

In this week's podcast we dig back into one os SA's 10 oldest towns - Uitenhage.
CLICK HERE TO LISTEN

We usually open up the Mzintlava Pass page when we write about this part of the tour, but today we will rather feature the much smaller, but very attractive Colonanek Pass.

Colonanek (also known as Colananek) is situated in the high mountainous area of the Eastern Cape, close to the KZN border between the towns of Mount Frere and Cedarville. The pass, which is gravel surfaced, contains 19 bends, corners and curves withing it's 4,4 km length, producing an average gradient of 1:30 with the steeper sections measuring in at 1:11.

The pass traverses the substantial rural settlement of Colana (from which it takes it's name) so drivers need to be aware of livestock, pedestrians, slow moving vehicles and minibus taxis throughout this traverse. The scenery is lovely with colourful mud huts bedecked with thatch adding a splash of colour to the scenery.

"To travel is to live" ~ Hans Christian Anderson