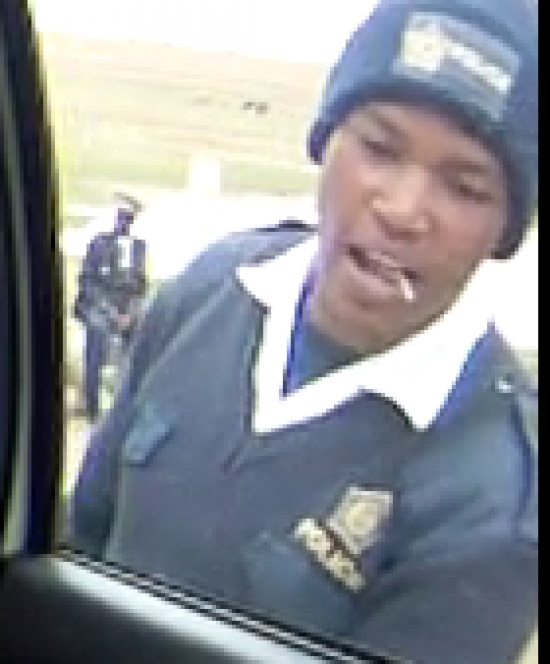 On our last day in Lesotho, we got stopped at one of three road-blocks near Leribe, which is on the outskirts of Maseru. All the goodwill over the previous days, where we had smiled and waved to hundreds of thousands of locals, was instantly negated by the greed of four corrupt Lesotho police officers. This is how they snag innocent tourists into their web of corruption:

They set up a small temporary stop-sign in the middle of the road. The officers then stand about 30 meters away. As you slow down for the stop sign, they beckon you to come forward, where you roll down your window for the standard "show me your driver's licence" routine. The officer then asks why you did not stop at the stop sign. Clever!

The opposite version of that, is you do stop at the stop sign when they beckon you to move forward, they say you have disobeyed a legal command from a police officer. Either way, you are snookered.

There is also the scam of "Your registration has expired" - That one is  a bit obvious, but they try it anyway.

Our interrogation also included the "You have mud on your number plates" charge.

There are no checks for roadworthiness, nor did the police officer make any attempt to actually check my drivers licence. He put it straight into his pocket. It was his main bargaining chip. The officers wore no name tags or force numbers. it was very clear that it was a personal revenue gathering exercise.

What concerned me most was the implied threat of being locked up in jail overnight. My wife was also "under arrest" for being in the same vehicle as me and the threat was made to also confiscate our vehicle for this concocted misdemeanour. The same charges were laid on our fellow travelling companions in the vehicle ahead of us. That cop (the beanie cop in the video clip) wanted R2500 as a settlement, which he then revised to R1500 and finally accepted R230.

It is easy to point fingers and say "You should have pulled his bluff" or "By paying the bribe you contributed to the police corruption". To be trapped and be threatened with your life and that of your family -  and personal safety at risk, is another matter altogether. You are in a foreign country and completely at their mercy. They are in charge and they WILL get what they want from you. I for one, was not willing to be arrogant, aggressive or smart-arse or under the circumstances.

I felt sick with disgust after the experience and I for one, will unlikely be returning to Lesotho in my lifetime because of the experience. There is a thread on this topic on our FaceBook page if you want to add your two cents worth.

We had a camera running as we were testing an ABS fault on one of the Toyota's in our convoy and we managed to get a clear picture of at least one of the police officers. I made a short video clip and posted it on YouTube the next day. It's had over 2500 views in a week, so clearly the message is getting across.

I wrote a detailed email to the Lesotho ministers of Police/Justice as well as Tourism. Both emails bounced back as undelivered. I then tried another 7 email addresses directly off the official lesotho Government website. So far, 7 of those have also returned 'undelivered'. I even copied it to the king of Lesotho. Up till now, there has not been a single response from any government official and it looks like it's going to stay that way. At the current rate of viewing of the video clip, there could be 100,000 views by the end of 2013. I find it extraordinary that no action is being taken. If tourists dont feel safe in a country, they simply dont visit.

And more is the pity, as Lesotho has some of the most astounding mountain passes to be enjoyed - several of them with summits in excess of 3000 meters! It was my intention to include the passes of Lesotho on our website, but that plan has now been shelved. As they say - the pen is mightier than the sword!