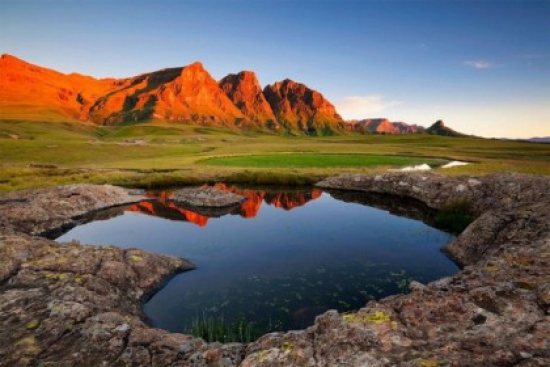 This week we take you on a cyber tour of some obscure, but interesting passes in the Hantam Karoo and beyond. The photo is something of a red herring and about as far from a Northern Cape scene as you can get. We visit a real old English fort on the banks of the Orange River (Gariep) as well as check out ghost rhinos and even more unlikely quaggas.

(Expand this page for the links by clicking on the photo, title or the READ MORE button)

1. Prieska Poort - A smallish tarred poort south of Prieska on the Orange River. Find out what makes this town tick.

2. Quaggasfontein Poort Pass - A gravel road through a poort near the town of Williston in the Hantam Karoo. Take a peek at a real corbel style house and learn a little about the Quagga.

3. Renosterpoort Pass - A remote gravel farm-style road in the middle of the Hantam Karoo. There are no more rhinos here and not much else other than  wide open spaces, peace and quiet and the occassional chirp of the summer cicadas.

Next week we are briefly back in the Western Cape with a quintuplet of interesting passes including the Highlands Pass, Elgin Valley Road, Old Houw Hoek Pass, Van der Stel pass, Floorshoogte Pass and the Karweiderskraal Pass - all of them filmed in real time.

We received information from Alta Coetzee who runs the guest-house "Die Hantamhuis" in Calvinia. She followed up on our request as to how Moordenaars Poort pass got it's name. Local farmer, Willie Burger, provides the answer as follows: " There were two groups of Khoi-Khoi who lived in the area of the kloof. There was rivalry between the two groups and one of the females caused a lot of jealousy between different men from the two tribes. This resulted in the two tribes declaring war against each other, resulting in fierce fighting, which took place along the very spot where the road traverses the poort. There were many fatalities and the careful observer can still find signs in the poort of a mass grave." This pass was featured last week. If you have not seen the entry you can simply click this link: Moordenaars Poort.

Forget about the budget speech and interest rates - drive a pass or two and live your life!