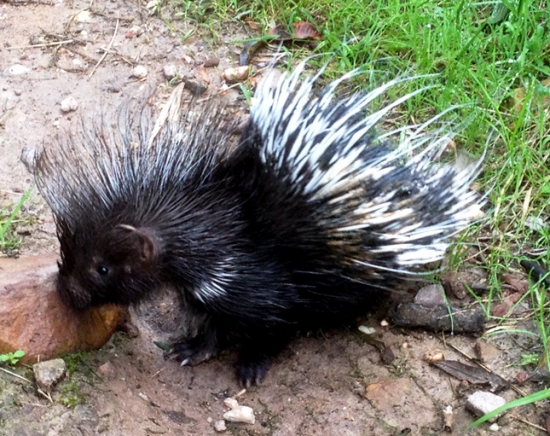 Our cover photo this week shows a baby porcupine - so young is was still unsighted and hard of hearing, but the sense of smell was acute. It was completely unaware of our presence until it sniffed a shoe and then all hell broke loose as it rattled its multiple sabres. These rarely seen nocturnal animals are true survivors. The photo was taken on an MTB trail at the Farleigh Forestry section on the Garden Route.

With five new passes filmed over the last ten days, dodging torrential rain and hail storms, it's been an eventful week. We have two great new off-road passes filmed (Attaquaskloof Ox-wagon route and the amazing Antoniesberg pass) which should be online in about two weeks time. Now that all the holidays and the elections are over, our news bulletins will revert back to their bi-weekly format.

Today we look at three diverse passes in various parts of South Africa, from Mpumalanga to the Northern Cape and finishing up in the Western Cape. We also discovered Angie's G-Spot. (details below)

[Expand this page to access the links, by clicking on either the Main Photo, the Title or the green READ MORE button]

1. Hessekwas Nek Pass - a short tarred pass close to a major cheese factory next to the Breede River at Bonniedale. This is also the most misspelt pass in South Africa.

2. Keikamspoort - a very remote gravel pass in the copper mining region of the Northern Cape A good place to find your soul.

3. Santa Pass - this tarred pass is in Mpumalanga, between Dullstroom and Lydenburg and has nothing to do with Father Christmas.

Filming the passes is the best part of the project and provides us with constant motivation to bring you the best of South African passes. Not all the passes on this website have been filmed from our vehicle. Some of the smaller or remote passes only get produced in Google earth 3D imagery. This is due to time constraints and all the more important passes will be filmed as time permits.

En-route to the Eastern Cape (and as always we prefer to travel on gravel), we stopped in at one of the quirkiest pubs on the Prince Alfreds Pass, for a bite to eat. We produced a short video clip on Angies G-Spot. Enjoy! (Hit your back arrow to return to this site once you're done watching the video)

Despite the joys of filming the passes, it's great to be back!