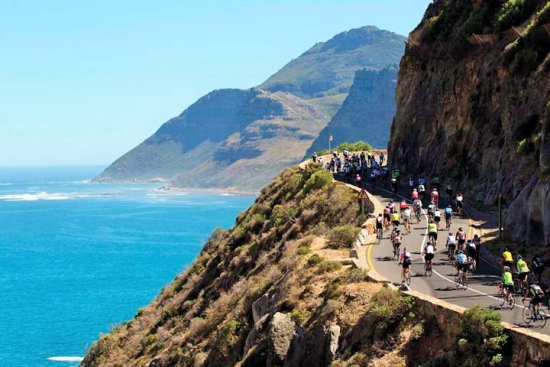 Cyclists normally ride over "Chappies" - Photo: There was no Chappies this year!

The Argus Cycle Tour turned into an unprecedented success, despite the devastating mountain fires. So often a major disaster brings communities together in acts of selflessness. Hats off to the 33,000 cyclists that completed the shortened 47 km route in the best of sportsmanlike attitude in an act of solidarity and honour for the firefighters. At the time of writing, the next major fire is raging in the Jonkershoek Mountains, near Stellenbosch leaving the entire area under a haze of smoke.

Cape Town is a city which rallies together in times of hardship as well as times of celebration. It is also the South African city which is packed with the most mountains passes. Did you know ....

[Expand this page by clicking on the photo, the title or the green READ MORE button to access the rest of this story and the links]

Did you know that the city of Cape Town or Slaapstad (as the Vaalies call it) plays host to 14 passes within its boundaries? It's possible, if you start early and don't dawdle too long in Hout Bay or False Bay over a leisurely lunch, to complete all 14 passes in a single day.

Cape Town boasts the first pass dating back to around 1658 which Zuma's arch villain, Jan Van Riebeeck, named Clooff Pass which connected the forests in Wynberg with Hout Bay and is today known as Constantia Neck. Another significant road which carries thousands of cars each day (and was Thomas Bain's final work), is Victoria Road from the city centre to Camps Bay along the coast.

Then there is the perennial favourite - Chapmans Peak Drive with its own stories of drama and triumph and a string of other, smaller, but no less significant passes to enjoy. The circuit of passes will provide the traveller with a good concept of the city's humble beginnings and brave expansion into the rest of South Africa. They are all on this website and packed with interesting snippets of history and tips for modern travellers. Click on a name and you will be taken to the page of your choice. Welcome home to the Mother City!

The Argus Cycle Tour (normally) routes over Smitswinkel Road, Chapman's Peak Drive, Suikerbossie and Victoria Road - (as well as smaller 'hills' like Eastern Boulevard, and Wynberg Hill) making it the most popular (and scenic) timed cycle race in the world. Remember to give cyclists their 1,5m of clearance space.

Within the next two weeks we will be introducing an expansion of our menu tabs on the website. The first of these will be titled READER SUBMISSIONS. From this tab you will be able to access all the information needed to film a pass yourself and send the raw material to us for editing and narration. The page will contain a comprehensive "How To" section as well as a list of passes that we still need video material for. All you need is a GoPro with a suction mount, your vehicle and a desire to travel.

Next week we will be based in the Karoo at Beaufort West, where we will be filming 8 of the passes in that area. Throw in the Thermos, activate the GPS and get out there and enjoy South Africa's great outdoors.