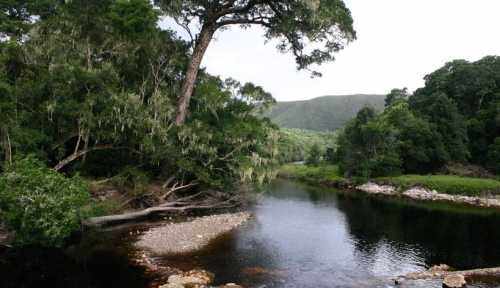 December 2015 is Thomas Bain month. This week we focus on two very technical passes in the Tsitsikamma forests which Thomas Bain tackled with enthusiasm and his trademark "can do" attitude. These two passes crossed the two most difficult gorges along the 165 km stretch between Port Elizabeth and George, which government authorities insisted was too difficult to build a roud through. Bain proved them all wrong and with a little help from Mother Nature in the form of devastating forest fires through the Tsitsikamma, the task of clearing the biggest trees became easier.

[To access the hyperlinks to these two passes, expand this page by clicking the Photo, the title or the green READ MORE button]

Bain created a camp for his 250 convict labourers along the banks of the Grootrivier near Nature's Valley, which today is known as the Kalander campsite - part of Cape Nature's De Vasselot Nature Reserve. It also happens to be the termination point of the famous Otter Trail - a perennially popular five day hike along the coast from Storms River to Nature's Valley.

Bain built the two passes in tandem under the most arduous conditions, having to contend with extremely steep slopes of loose shale, heavy rain-storms and large troops of baboons which constantly harrassed the construction team. His labourers worked hard in wet and muddy conditions to complete the two difficult passes, which would later become part of the national road system known as the R102. Both passes were tarred and widened in the 1950's and were used for over 100 years. The passes fell into disuse when the new N2 Tsitsikamma Toll Road was constructed in 1983.

Today only one of the two passes remain open to traffic, the other having fallen into a state of disrepair and now falls under the jurisdiction of Cape Nature, so you can still walk or cycle it (at your own risk).

Cyber Drive with us as we take a more in depth look at two of Thomas Bain's wonderful passes of yesteryear.

Drive defensively and get home safely!

Thought for the day: “First thing to do every morning is read or listen to something positive. Your mind is like a garden.
Whatever you plant grows. Plant good stuff.” ~ Alwyn Cosgrove