The Swartberg Pass in the 1800's - Photo: Swartberg Mountain Tours

Like our Chritmas Eve news release, this final news item for 2015 similarly falls on Old Year's Eve. We were expecting a low readership due to the significance of the day, but last week's news release was read by over 12,000 people between the website and the FaceBook entry!

On this final day of 2015, we give you a real treat and in keeping with our December theme, take you on a cyber drive with four videos over Thomas Bain's final masterpiece.

We also have a closer look at the road death toll and take an 'out of the box' solution.

[To access the links and read further, expand this page by clicking on the title, the photo or the green READ MORE  button] 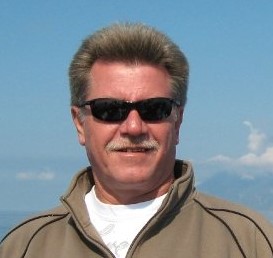 Mike LeicesterAbout a year ago, Mike Leicester from Sandton contacted us and offerred his services over a range of tasks in respect of the passes. We accepted and pulled Mike into the fold. He learned quickly and today runs our spreadsheet statistics as well as cross checks all our stats for every pass in South Africa.

He's a stickler for detail and insists on everything being perfect. We convinced him to try his hand at pass filming and he is now producing first class videos and has progressed well past the 60% completion point with the all the passes in Gauteng, Mpumalanga, North west, Limpopo, Free State and KZN.

His commitment, work-ethic and energy for the project has been a revelation and a blessing and we would like to acknowledge his enormous contribution to this website. Mike virtually runs the entire northern half of the project which effectively means the website will reach 100% completion before the end of 2016.

With a death toll higher than the 2014 figures, South Africa once again takes a look at it's driving shortcomings and inevitably there are cries for more visible policing and a stricter policy on the control of minibus taxis, who account for an alarmingly high percentage of road deaths. relative to the number of taxis on the roads.

In Russia, most cars are equipped with dash-cams. Drivers are using these to prove their innocence in court and for insurance claims. When GPS systems were first produced, no-one thought they would catch on universally, but the opposite has proved to be the case. Likewise the argument for mobile phones. It's only a matter of time before many South African's will be making use of dash-cams on a large scale.

If the traffic authorities were to create a depository for short video clips or photos, proving the guilt of driving offences captured on these devices, many more motorists could be booked in an effort to achieve that elusive 'zero tolerance' state of mind. We (MPSA) have inadvertantly captured hundreds of traffic offenders on camera during our pass filming trips. If every motorist with a dashcam could send images in to traffic authorities, quick prosecution of the guilty party can take place. Clips/photos can be submitted with date, place and time of offence to a national database - similar to the Crime Line concept.

In the photo below, taken on the N4 in the Krokodilpoort in Mpumalanga, the photographic evidence is crystal clear with the registration number clearly visible: 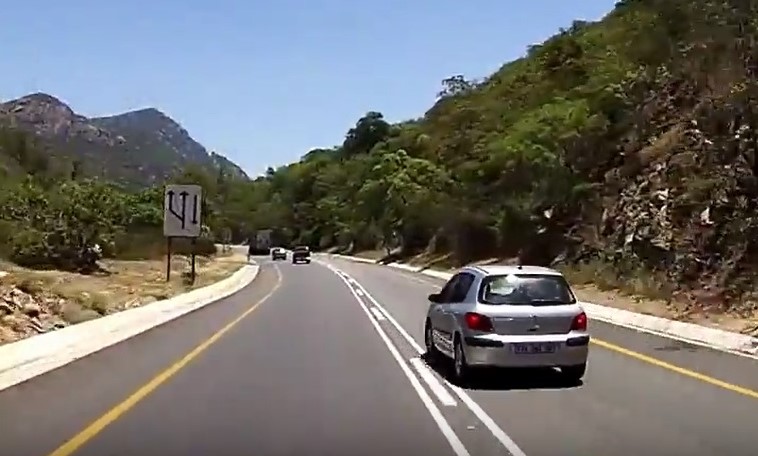 Running traffic violation on camera / Photo by MPSASo, let's say 1 million dash cams could make a huge difference to the way South African's behave on the roads, with the knowledge that reckless or lawless behaviour is highly likely to be punished.

There would be legal issues to consider and we would like to hear from the legal minds amongst our readers, as to whether such a proposal could fit into our current traffic act and stand up in court.

On to happier things dating back to 1880 when an older Thomas Bain was tasked by the Cape government to find a suitable 'all weather pass' through the mighty Swartberg range. The two obvious poorts - Meiringspoort and Seweweekspoort - were regularly closed and often severely damaged for months by regular floods, resulting in drastic delays to farmers and anyone wanting to move goods from, or to the interior. Bain spent many months on foot and on horseback traversing the mountains this way and that, until he finally confirmed his chosen line up and over the Swartberg mountains, ending close to the lovely Karoo town of Prince Albert.

This is the oldest unaltered pass in South Africa and has stood the test of time for a full 129 years. If you have never driven this road, do so before it's too late. And if you have driven it, go and drive it again! And if you can't get there, you can cyber drive it right here!

We have completely revamped the page to our latest standards and have included an overview and orientation video for first time drivers, which brings the video tally to four for this pass, allowing us to properly dig into the detail.

This was Thomas Bain's final pass building effort and it becomes another fitting tribute to our most famous road engineer, to feature this pass as our grand finale for the year 2015.

We wish all our readers, followers and supporters a prosperous New Year and safe travelling home. A big thank-you to each and every one of you for every pass suggestion, photograph, information, correction or just simply paying us a compliment. You make it all worth while. Keep it coming in 2016!

Thought for the day: To become truly great, one has to stand with people, not above them - Charles DeMontesquieu