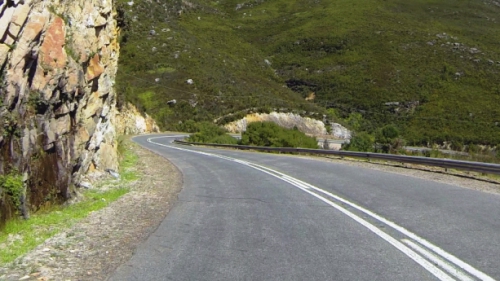 This week we focus on the Outeniqua mountains in the Southern Cape and on one of it's three great passes. Once again, Thomas Bain features as the builder/designer of this lovely mountain pass, but the original road was a lot more dramatic than the modern road we travel on today.

As from this week we will be publishing all refilmed passes as they are published per week, plus any new passes, (besides our featured pass) in these weekly news releases.

[To access the featured pass of the week, expand this page by clicking on the title, photo or green READ MORE button]

The first pass over the Outeniqua mountains was the Montagu Pass, but the growing coastal port of Mossel Bay had residents that soon became quite demanding about the long detour they had to travel to get to Oudtshoorn, which was in those days a very busy, booming town with the ostrich feather industry in full swing.

The old Attequas pass was still the main access road from the coast into the Karoo, and a smaller more tortuous track known as the Ruitersbos Pass covered a segment of the lower reaches of the mountain slopes.

The roads authorities prevailed on Thomas Bain, who had recently completed the magnificent Prince Alfred's Pass north of Knysna, to cast his experienced eye over the rugged terrain. Bain made use of both the old roads mentioned above, plus some new sections, to build the first proper version of what was to become the Robinson Pass which connects Mossel Bay with Oudtshoorn.

Over the years it has been rebuilt and realigned to better lines to form the beautiful and comfortable pass we drive on today. If you have never driven this pass, watch the video and convince yourself to discover or rediscover, one of the Southern Cape's finest mountain passes.

New passes added in the past 7 days:

Thought for the Day: "Success is perceptible ... We can touch it, smell it and taste it."