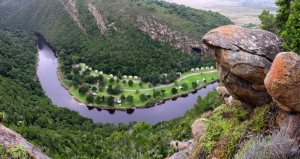 As you read this newsletter, the MPSA team are somewhere between Lundin's Neck and Jouberts Pass on Day 1 of the Official Ben 10 Eco Challenge Tour. A massive amount of planning went into this trip and now it's only matters beyond our control (like the weather), that can affect the adventure. We will do our best to post regular pics and short videos on our Facebook page throughout the tour.

Our featured pass this week takes us right back to our roots and the peculiar set of circumstances of how Mountain Passes South Africa was born. The GoPro HERO1 had just been launched in 2010/11 and I had always wanted a waterproof video camera that could handle the rigours of adventure sports and film in HD.

The primary idea was to film my crew on a sailing/racing yacht with the idea being to iron out errors and improve performance. On the very first outing with the new GoPro, when the yacht club cancelled racing due to gale force winds, we decided to rather go for a sail than sit in the pub.

From there things went south rapidly (pun intended) as we planed out of the harbour at high speed and out onto Table Bay to enjoy the full power of the Cape Doctor. Just as we reached a speed of 20 knots (37 kph) we broached (a nautical term for a downwind capsize). [Read more lower down]