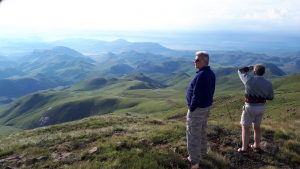 Last week we gave you an overview of the Ben 10 Eco Challenge Official Tour. This week we look into the first of the four days in more detail which illustrates the human interactions as the large group of people slowly bonded together to form a cohesive unit, taking care of each other, to ensure a successful outcome for all. The full story encompassing 23 chapters will be published over the next 3 weeks and thereafter will be permanently embedded under a separate menu tab on the main Ben 10 page. [More lower down...]

Our next 1 day tour in the Western Cape takes place on Easter Sunday (21st April) and includes 3 gravel and 3 tarred passes in the mountains north of Ceres. The route includes the magnificent Droelandskloof Pass with the anchor pass being the ascent and descent of the Wapadsberg Pass - a major climb to an amazing view-site. The route is suitable for any vehicle with reasonable ground clearance. We still have space left, so if you're looking for something different to do over that long Easter break, bring the whole family along as our prices are per vehicle and not per person. Book online here.

This brand new bespoke tour will take place during June or July over three days starting in George and ending in Patensie. It will include the 7 Passes Road, Gouna Pass, Kom se Pad, Prince Alfred's Pass, Uniondale Poort > Overnight in Uniondale for some spookstories.

Day 2 will route through a southern approach to the stunning Nuwekloof Pass and down into the western Baviaanskloof where we will visit a tree house, the Makedaat caves, a bonsai nursery and negotiate the 8 water crossings through Studtis Poort with an overnight stop at the Zandvlakte guest farm.

Day 3 will be spent exploring the Baviaanskloof eastern bio-reserve and include the passes of Grasnek, Langkop, Holgat and Combrinks with an overnight stop at Bruintjieskraal on the banks of the Grootrivier. The next day a short drive out through the Grootrivierpoort will end the tour at Patensie. No less than 12 of the passes on this tour were either designed or built by Thomas Bain. Bookings for this tour will open in a week's time. The tour is only open to 4WD vehicles.

We also examine the April Fools Day phenomenon and explore the extraordinary success of our April's Fool post on Facebook. At the time of writing the post had 41,778 views over a 72 hour period. Remarkably the post (which took 5 minutes to knock together) ranks as one of our most successful posts ever. Understanding the power of social media is complex with this post knocking all the standard barriers down. [More lower down...]

In keeping with our theme on the challenge passes, we feature another of the big 10 passes in the Eastern Cape Highlands. [More lower down]